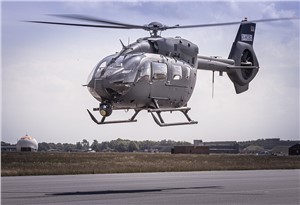 The German Air Force's Tactical Data Link Exercise "Timber Express" took place during the first weeks of June at Jagel Airbase in Schleswig-Holstein. This annual exercise focuses on testing and evaluating the interoperability of various systems using multiple tactical data links across the land, sea and air domain. As in the past years, HENSOLDT participated with equipment and personnel from its Avionics division, demonstrating our expertise in the field of Tactical Data Link (TDL) integration into airborne mission systems.

In a joint endeavor with Airbus Helicopters Germany (Donauwörth), an H145M helicoter was modified to allow the exchange of tactical data via Link 16 and VMF. HENSOLDT#S’s equipment provided the H145M with unprecedented capabilities in terms of cross-platform communication which is a core element of future network-oriented operations.

HENSOLDT provided the Mission System based on Euroavionics' Euronav7 software, which has been upgraded to bring TDL functionality to the Human-Machine Interface (HMI). The software for data link processing was installed on a demonstrator rack in the crew compartment. Using the default communication equipment installed on the helicopter, the connection to the data links was established.

The H145M was the first helicopter of its kind with the described capabilities. We demonstrated the execution of digital aided close air support scenarios (DaCAS) with Joint Terminal Air Controllers (JTAC) via VMF, showing how the digital information flow eased mission execution and significantly reduced operator workload. Using EuroNav's functionality to steer the on-board EO/IR sensor, a semi-automated slewing of the camera to the received coordinates and the verification of the target via video-downlink could be demonstrated.

The addition of Link 16 brings real time situational awareness to the cockpit and allows digital communication with other Air Force entities (e.g. AWACS or Eurofighter). The exercise networks allowed the helicopter to exchange information across gateways with naval assets in Finland, the Netherlands and the WTD81 in Greding.

HENSOLDT received very positive feedback from Airbus Helicopters, the LUH aircrew, JTACS and other participating personnel for this demonstration.

HENSOLDT also demonstrated how the currently fielded helicopters TIGER and NH90 could be integrated into the Link 16 network in a quick and cost-efficient way. Optarion (Einsatzunterstützungsanlage - EUA) acted as a gateway between Link 16 and the platform specific data links for TIGER and NH90. The gained knowledge from Timber Express will be included in the upgrade of existing avionics, as well as in the development of future systems and the integration of sensors.