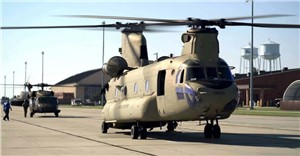 Honeywell (NASDAQ: HON) has reached a significant milestone with the U.S. Army by being the first engine to test (FETT) as part of its Cooperative Research and Development Agreement (CRADA) for the next-generation engine for Chinook helicopters. The CRADA program and testing of the T55-714C engine is planned over a two-year period to validate the benefits and ease of integration of the new engine variant onto the Chinook platform. This will allow the U.S. Army to evaluate the capabilities of the newest rendition of Honeywell's battle-proven T55 engine.

Testing of the first T55-GA-714C engine was successfully initiated at Honeywell's Phoenix test facilities in November to verify the design and establish the performance benchmark in preparation for the engine installation on the flight test aircraft. This is an essential next step for the U.S. Army to test the new T55-GA-714C engine capability for its latest CH-47 Chinook helicopters. To date, the engine has tested through Maximum Continuous Power, demonstrating mechanical operation and acquiring key performance data. Additional testing is planned at significantly higher power levels.

"First engine to test is a significant achievement for the program and is the culmination of detailed design work, component manufacturing, system integration and validation. Now all the engineering is coming to life in the rigorous testing of this enhanced engine for the U.S. Army," said Dave Marinick, president, Engines and Power Systems, Honeywell Aerospace. "This engine is a natural incremental complement for the Chinook, keeping the platform relevant for the next generation of warfighters. We are confident that our 714C engine will exceed the expectations of the U.S. Army."

With 6,000 horsepower, Honeywell's upgraded engine is 23% more powerful and consumes 8% less fuel than the current T55, even in the most demanding operating conditions. New modifications also make the next-generation T55 easier to maintain with lower operating costs, delivering increased readiness for the warfighter.

"We are proud to partner with the U.S. Army on the CRADA program for the next-generation T55-GA-714C engine," said Steven Williams, vice president, Defense Aftermarket, Honeywell Aerospace. "We will be able to demonstrate the power, capability and reliability of the upgraded engine to the U.S. Army. Additionally, we are on track and on schedule to deliver the new engines and meet the U.S. Army's needs."

The T55-GA-714C engine is specifically designed for next-generation military operators and will improve the Chinook helicopter's ability to lift troops and heavy cargo for the U.S. Army. Because the engine is based closely on the T55 version currently in use, minimal airframe modifications are required — the same intake, exhaust and engine airframe mounts are used. This design provides the U.S. Army with a major engine improvement without the need to retrain their maintenance and operational staff or undertake major aircraft changes.

In 2020, Honeywell won a competitive repair and overhaul contract for the T55. In addition, Honeywell completed a new, world-class engine repair and overhaul facility in Phoenix. That move allowed the repair and overhaul work on the T55-GA-714A engine to be fulfilled in the same location as new engine production. The T55 center of excellence provides for a shared workforce, facilities and engineering resources between both engine lines and delivers up to 20 engines per month to the U.S. Army, foreign military and commercial customers.

Honeywell first delivered the T55 engine to the U.S. Army in 1961 at 2,200 shaft horsepower on the CH-47A helicopter. Since that time, the engine's power has nearly tripled to 6,000 shaft horsepower. Each performance increase on the T55 is accompanied by reduced fuel burn, increased reliability and decreased maintenance hours. The T55 engine is the world leader in powering heavy lift helicopters. Over 900 CH-47 helicopters are operated today by various militaries around the world.