The UK will continue to adopt a forward presence around the world, ensuring the men and women of our Armed Forces are globally engaged, constantly campaigning and in lockstep with our Allies 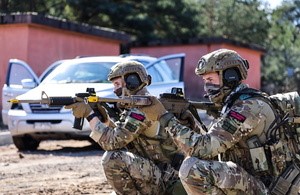 As part of the major development to the UK’s Defence policy, detailed in the Command Paper, Defence in a Competitive Age, the UK’s military will increase its defence of Britain’s interests across multiple domains and in all corners of the globe.

At sea we will have more ships, submarines, sailors and Future Commando Force deployed on an enduring basis, to contribute to security, protect shipping lanes and uphold freedom of navigation.

This year’s Carrier Strike Group deployment to the Indo Pacific is just one example of this more confident, UK-led, highly technological, and internationally partnered effort to strengthen our alliances and national interests in a region critical to global peace and prosperity.

On land our world class Army will be spearheaded by a new special operations Ranger Regiment able to operate discreetly in high-risk environments and be rapidly deployable across the world.

Details released in the Command Paper also reveal new plans for persistent training for our Armed Forces globally which will reinforce UK’s strategic presence across the globe.

High profile defence activity this month alone demonstrates how the Armed Forces deter global threats; fresh strikes have been launched against Daesh in Iraq, a drugs bust conducted in the Northern Arabian Sea and naval operations with NATO Allies completed in the Baltic.

"In the coming years, we will broaden the spectrum of this worldwide engagement even further. Across a vast global footprint, we will be constantly operating to deter our adversaries and reassure our friends, integrating with our Allies, and ready to fight should it be necessary."

Future Commando Force
The Royal Navy will transform the Royal Marines into the Future Commando Force (FCF), marking an evolution from amphibious infantry held at readiness in the UK to a versatile Special Operations capable Commando force persistently forward deployed.

Receiving over £200m of direct investment across the next decade, the FCF will be optimised to conduct roles traditionally carried out by Special Forces to deliver specialist capacity building and maritime security operations, pre-empt and deter sub-threshold activity, and counter state threats.

HMS Trent
Later this year, Royal Navy patrol ship HMS Trent will for the first time operate from Gibraltar. From here she will be able to support NATO operations in the Mediterranean, work with our North African partners and support multinational counter piracy operations in the Gulf of Guinea off the coast of West Africa. HMS Trent will be able to integrate with the French Navy through our Combined-Joint Expeditionary Force, now fully operational.

The Royal Navy already has ships forward deployed in the Caribbean, South Atlantic and Middle East. The Royal Navy will continue to enhance its forward presence with further deployments of Offshore Patrol Vessels in the future.

Royal Navy secures drugs bust
The benefits of our Armed Forces always being on the front foot beyond our borders has been demonstrated in recent weeks by Royal Navy warship HMS Montrose completing its third drugs bust in five weeks from its permanent presence in the Gulf.

Ranger Regiment
The British Army is establishing a special operations Brigade, the core of which will be four battalions of the new Ranger Regiment.

Over the next four years a share of £120 million will be invested into the unit, enabling it to undertake roles traditionally carried out by Special Forces. They can be expected to be involved in collective deterrence such as training, advising, enabling and accompanying partner forces.

Alongside special operations, a further Brigade will be established. The Security Force Assistance Brigade to provide guidance and training to allied partner nations and draw expertise form across the Army.

Elements of each Brigade will be routinely deployed across the globe to assist partner nations in delivering defence and security.

Tell a friend:
Armed Forces to Be More Active Around the World to Combat Threats of the Future