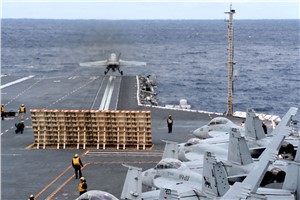 “We continue to see EMALS and AAG perform according to specifications to execute cats and traps with the objective of reaching the robust evolution rates necessary for combat,” stated Scott Forney, president of GA-EMS. “We are working closely with the Navy and CVN 78 crew to ensure operational performance is achieved. We remain extremely proud of our team, the squadrons’ pilots and the ship’s crew for all their hard work and dedication, and look forward to continuing success as CVN 78 undergoes these continued at sea periods.”

FDC is a qualification of the ship’s various aviation systems and includes the crews’ qualification to operate the numerous systems. FDC was completed March 20 following day and night launch and recovery exercises with F/A-18E/F Super Hornets. FDC is intended to qualify and prove ship and crew capabilities under operational conditions that can occur while on deployment.

GA-EMS is delivering EMALS and AAG for the future USS John F. Kennedy (CVN 79) and USS Enterprise (CVN 80). Significant cost savings are being realized through multiple ship production contracts, which minimize gaps in production while maximizing planning, scheduling and delivery to support all three Ford-class carriers.