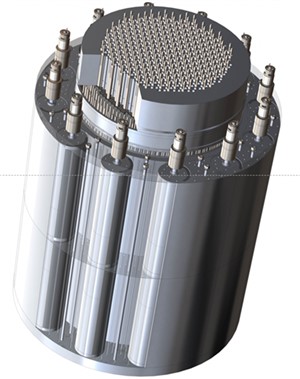 General Atomics Electromagnetic Systems (GA-EMS) announced today that it has delivered a design concept of a Nuclear Thermal Propulsion (NTP) reactor to power future astronaut missions to Mars for a NASA-funded study. The study, managed by Analytical Mechanics Associates (AMA), explored a design space defined by key performance parameters as well as figures of merit. The GA-EMS design exceeded the key performance parameters and optimized the NTP reactor for manufacturability, the highest ranked figure of merit.

“GA-EMS is uniquely positioned to develop and deliver a cost effective, safe NTP reactor system to progress future space missions,” stated Scott Forney, president of GA-EMS. “This is an exciting effort that directly aligns with our 60+ years of nuclear energy research and development, including nuclear reactor design and deployment and our expertise in space systems. We are excited to contribute our ideas to the next generation of space exploration for our country and our world.”

GA-EMS’ NTP reactor concept leverages advancements in modern nuclear materials and manufacturing methods with valuable experience from the company’s involvement on NASA Atomic Energy Commission (AEC) Project Rover in the 1960s; one of the first programs to demonstrate the feasibility of space-based nuclear thermal propulsion. GA fabricated approximately 6 metric tons of the nuclear fuel kernels for the project. In 1965, the company was also directly involved in nuclear fuel testing and characterization for the SNAP-10A reactor, the only U.S. nuclear power reactor launched into space, which powered the satellite for 43 days. The fuel used for that reactor is the same fuel that has been used since the 1950s in the 66 Training, Research, Isotopes, General Atomics (TRIGA®) reactors built in the U.S. and around the world. GA-EMS continues to build upon these technologies today.

The GA-EMS design proposes new features that address issues observed in historical designs, such as fuel element corrosion, and achieves a compact core using High-Assay Low-Enriched Uranium (HALEU) instead of High-Enriched Uranium (HEU). As a result, GA-EMS was invited recently to brief the National Academy of Sciences (NAS) Engineering, and Medicine Committee on Space Nuclear Technologies.

“Our team was extremely honored to present our ideas for a NTP reactor design to the NAS committee,” said Dr. Christina Back, vice president of Nuclear Technologies and Materials at GA-EMS. “NTP systems for NASA Human Mars Missions are achievable in the near-term, and our solution takes advantage of cutting-edge advances, especially with nuclear fuel and high temperature ceramic matrix composite materials. By applying modern science and engineering methods, GA-EMS is reducing risk in space NTP technology development and rapidly advancing the state-of-the-art.”