Otokar Aims to Add New Achievements in Asia, Following its Success in the Gulf Region 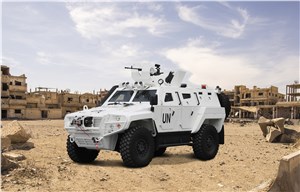 Otokar, with products used in more than 30 countries across the world, will attend at the DSA Defense Services Asia Exhibition set to take place on April 16-19, 2018 in Kuala Lumpur, Malaysia. During the four-day exhibition Otokar will promote Cobra II armored personnel carrier.

Otokar, Turkey's largest privately owned defense industry company, will participate in DSA, the biggest defense industry exhibition in Asia, with Cobra II Armored Personnel Vehicle. In the 16th edition of the exhibition, Otokar will be in Turkish Pavilion Hall 1 B Stand No 10240, promoting Cobra II, with its high level of protection, spacious interior and superior mobility for potential users.

Stating that Otokar has allocated four percent of its turnover in the last decade for research and development and has been serving over 30 countries in five continents, Serdar Görgüç, General Manager, Otokar said, "Otokar continues to strengthen its position in the international defense industry with its technological superiority, engineering power, design capabilities and over 30 years of experience in military vehicles. More than 30 thousand military vehicles designed to meet user expectations and needs against present day and future threats are actively used in several different missions in Asia, the Middle East, Africa and Central Europe."

Görgüç mentioned that Otokar, adding new achievements every day in the international arena, has taken its position in the industry to higher levels with its technology and knowhow transfer, "As a result of the deal we signed last year for 8x8 amphibious armored vehicles to meet the needs of the United Arab Emirates Armed Forces, we took our position in the industry to a whole new level. With the deal signed by Al Jasoor, founded with the joint efforts of Otokar and Tawazun, Otokar now stands apart in the defense industry, not only with its products but also global knowhow, engineering, R&D and technology transfer capabilities."

Görgüç continued: "Our aim is to be able to respond to the needs and expectations of different users in the best possible way through similar collaborations. We regard the DSA Exhibition as an important means in attaining this goal and strengthening our presence in the region. Otokar vehicles are already serving successfully in the Asia-Pacific region. The first COBRA II armored vehicle exports we realized last year were delivered to this region and our vehicles are actively used in United Nations missions. At Otokar, we follow export opportunities in the region closely. We are aiming to add new achievements in the Asia-Pacific region, similar to what we have already succeeded in the Gulf region."

HIGH PROTECTION AND MOBILITY CAPABILITIES
COBRA II, designed by the R&D team and built on the existing COBRA vehicle to serve security forces in various missions, features a modular platform with superior technical and tactical specifications. COBRA II delivers high performance in the most challenging terrain and climate conditions and stands apart for its 9-personnel capacity as well as high level of protection, firing power and mission-oriented equipment. COBRA II, which was added to Otokar's product range in 2013, also comes in an amphibious version and offers a modular construction. Designed and produced by Otokar in line with client expectations against present day threats, COBRA II offers outstanding level of protection against ballistic, mine and IED threats. COBRA II, subjected to rigorous climatic and amphibious tests in different parts of the world, traveled thousands of miles and also successfully passed the open sea swimming tests. COBRA II is already in service with Turkish Armed and Security forces and with export customers.

Tell a friend:
Otokar Aims to Add New Achievements in Asia, Following its Success in the Gulf Region