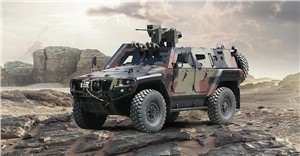 Stating that Otokar military vehicles are actively used in five continents, General Manager Serdar Görgüç, said, “Our COBRA II vehicle, which we are exhibiting at ADEX 2022, is already successfully serving the Azerbaijani Armed Forces. Also, we are very proud that different types of Otokar military vehicles are already in service in Azerbaijan. ADEX is a great opportunity to get together with the Azerbaijani Armed Forces officials, listen their requirements and seek for further opportunities to serve their needs.”

Stating that Otokar has a long-standing cooperation with Azerbaijan, Otokar General Manager Serdar Görgüç said, “We have been working to meet the land system needs of Azerbaijan since the late 1990s when Otokar military vehicles started to serve in the country. Today various types of Otokar armored vehicles are in the inventory of different users in Azerbaijan.”

Reminding that Otokar exported Cobra II vehicles to Azerbaijan, Görgüç added: “We are proud that the successful performance of Otokar armored vehicles is appreciated by users in Azerbaijan. Last year, Azerbaijan included Cobra ll vehicles in its inventory for the first time. We continue to meet the expectations and needs of Azerbaijan with our new generation armored vehicle Cobra ll, known as the best in its class and responds to the different needs of users with its modular structure. I believe that the friendship and ongoing cooperation between Turkey and Azerbaijan will continue for many years, and I am happy to state once again that we, as Otokar, are ready for any task.”

As a listed NATO and UN supplier, Otokar’s military vehicles are actively in service in more than 35 countries and more than 55 end users in different climates and geographies around the world. Otokar’s combat proven know-how in land systems and related R&D, engineering and testing capabilities as well as its wide product range puts Otokar at the forefront of the global defense industry. The company introduces innovative solutions in land systems by taking into account the current and future requirements of modern armies and security forces.

COBRA II
COBRA II offers high level of protection, payload capacity, and large internal volume. In addition to superior mobility, COBRA II also comes with the capacity to accommodate 10 personnel including the driver and commander, offering high protection against ballistic, mine, and IED threats. Delivering high performance in the toughest terrain and climate conditions with high power to weight ratio, COBRA II is tested rigorously in different parts of the world, on toughest terrain and climate conditions, and made thousands of miles. Preferred especially for offering a wide range of weapons integration and mission equipment options, COBRA II is successfully in service of ambulance, command & control, reconnaissance, border protection, signal vehicle as well as internal security and peacekeeping missions. The modular structure of COBRA II also makes the vehicle a flexible platform for a personnel carrier, weapons platform, ground surveillance radar, and CBRN reconnaissance vehicle.