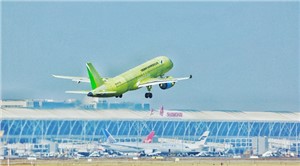 C919 AC106 took off from the fourth runway of Shanghai Pudong International Airport at 10:15 on December 27th, 2019, and returned and landed at Shanghai Pudong International Airport at 12:20 after completing 30 test points during a flight of 2 hours and 5 minutes, successfully completing its maiden flight. Up to now, all of the six C919 flight test aircraft have been put into flight test, and the program has officially entered into intensive flight test phase with 6 aircraft carrying out flight tests in 4 places.

AC106 is the sixth C919 flight test aircraft, which mainly undertakes the flight tests related to the verification of cabin, lighting and external noise as planned. Crew members of this flight include Test Pilots Wu Xin, Ma Hongwei and Zhang Jianwei, and Flight Test Engineers Zhang Hongliang and Li Chang.

The C919 program upheld the underlying principle of "pursuing progress while ensuring stability, safe development and high-quality development", the final assembly cycle of single aircraft was shortened continuously, and three aircraft, i.e. AC104, AC105 and AC106, were put into flight test successively in 2019. At present, AC101-105 are carrying out flight tests respectively in Pudong of Shanghai, Yanliang of Xi'an, Dongying of Shandong, and Nanchang of Jiangxi. The flight tests have been carried out in parallel in the 4 places, the efficiency of flight tests has been improved, and the supportability of flight organizations in multiple places has been verified.

At the same time, various verification tests of C919 aircraft have been rolled out. A breakthrough has been made in the independently developed normal control law, and flight tests have been carried out for verification; the determination of critical icing based on the amendment of FAR25-121 is completed for the first time in China; it is the first time to complete the icing wind tunnel test of wing anti-ice system in China, which fills the gap of the simulated icing and ice protection tests in China; The last subject specified in the test program of the test aircraft AC01 for whole aircraft static test was completed on November 30th, 2019, which means that all the static tests undertaken by the test aircraft AC01 for C919 aircraft static test before certification have been completed.

In addition, all production work of C919 aircraft is being carried out simultaneously, and the operation support system has been recognized by authority. The manufacturing of the test aircraft AC02 for whole aircraft fatigue test has been completed, the production of the parts and components of the first delivered aircraft has commenced, and the system and structure orders are being issued.