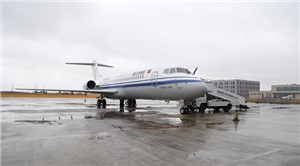 ARJ21 aircraft with a nationality registration number of B-650R took off from Shanghai Pudong International Airport at 11:02 on February 28th, 2021, and flew to Beijing Capital International Airport. This is the fourth ARJ21 aircraft received by Air China, and is also the first ARJ21 aircraft delivered to a customer by Commercial Aircraft Corporation of China, Ltd. (COMAC) after the New Year. This aircraft is in all economy-class cabin configuration and has seats for 90 passengers. It is purchased by CNAC Beijing Financial Leasing Company Limited and leased to Air China.

Air China and COMAC are bosom friends. COMAC would take the principles of "being customer centered, and satisfying customers" as the start point and end point of all work, and take customers' success as its own success. It was expected that more and more ARJ21 aircraft would join the fleet of Air China. (Editors: Zhao Tingting and Wu Jian, Photographers: Wang Kai, Wei Meng, Chen Dong and Xu Bingnan)