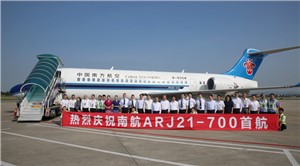 Flight CZ3898 with a full passenger load took off from Guangzhou Baiyun International Airport and flew to Jieyang Chaoshan International Airport at 9:42 a.m. on July 15th, 2020, marking the official start of a new journey for commercial operation of the first China-made ARJ21 aircraft of China Southern Airlines. According to the fleet development plan, it was estimated that the size of ARJ21 aircraft fleet of China Southern Airlines would reach 35 by 2024.

It is reported that the enthusiasm of passengers to try a ride on China-made ARJ21 aircraft is very high. The tickets for Flight CZ3898 of the inaugural flight were sold out in just a few days after selling is started on June 18th, and the sales speed and passenger load factor were far beyond those of other models on the same route, which is a huge hit. In addition, the passenger load factor of the flight operated by ARJ21 aircraft from Guangzhou to Jieyang had exceeded 70% within three days from July 16th to 18th.

On the same day, in order to celebrate the official launch of its first ARJ21 aircraft into commercial operation, China Southern Airlines carefully prepared the inaugural flight ceremony and set up a photo area with ARJ21 characteristics in the terminal building for passengers to take selfies. The cabin of ARJ21 aircraft is specially decorated. Both the bright Five-Starred Red Flag and the characteristic collocation of elements themed with "here comes ARJ" in the cabin highlighted the special significance of the inaugural flight.

In order to make passengers experience the safe, comfortable and smooth service of China-made aircraft, China Southern Airlines also set up a special check-in counter in the check-in area on the day of the inaugural flight, and assigned business backbones on site to assist passengers to quickly go through the procedures such check-in, consignment and health declaration, guide passengers to board the aircraft in an orderly manner, and ensure that the aircraft door is closed on time. As passengers boarded the aircraft one after another, the flight attendants presented a beautiful souvenir of inaugural flight to each passenger. Before the aircraft took off, the flight attendants introduced the features and operation of ARJ21 aircraft for passengers in detail.

"Good morning, ladies and gentlemen. This is your captain speaking. On behalf of the crew, let me extend a very warm welcome to all of you who have chosen to take the inaugural flight of the first ARJ21 aircraft of China Southern Airlines from Guangzhou to Jieyang. ARJ21 aircraft is a new type of turbofan regional jet independently developed by China and owning independent intellectual property right. Today, the first ARJ21 aircraft of China Southern Airlines will officially start a new journey for commercial operation with missions and dreams." After the aircraft entered level flight, Captain Chen Fan, a Party member, welcomed the passengers on the inaugural flight with a distinctive captain's announcement.

Many passengers also took photos in the cabin. Madam Wang, a passenger, told the reporter: "When I heard that a China-made passenger aircraft would operate a flight to Chaoshan area, my hometown, I immediately bought a ticket for this flight. I can go home and then fly back to Guangzhou on the same day. I am very happy and very proud of this experience!"

Careful preparation and arrangement are made, and safe and comfortable flight experience is gained.

The cabin layout and interiors of the ARJ21 aircraft of China Southern Airlines are custom-designed according to its own unique needs. Compared with other regional aircraft on the same route in the market, it has obvious comfort characteristics. The aircraft is in all economy-class cabin configuration with seats for 90 passengers, and the seats are arranged with two on the left and three on the right of the aisle in each row. The aisle is relatively spacious, with a width of 19 inches, so there is still room left and the aisle will not be blocked when the meal cart is passing through. Each seat is 17 inches wide, making it more spacious and more comfortable. The fore-and-aft clearance of the seats is 31 inches, which is the same as that of the seats in economy class on mainstream wide body aircraft. When a front seat is reclined backward, the lower end of the seat will move forward automatically, ensuring a relatively spacious seating space for a rear seat occupant. In addition, the rear part of each row of seats on the aircraft is equipped with USB charging ports, which are convenient for passengers to charge electronic devices.

In the future, according to the range and economic efficiency of the aircraft, China Southern Airlines will continue to expand the regional market, gradually deploy ARJ21 aircraft to Beijing Daxing International Airport for operation, expand the service scope of Guangzhou-Beijing dual hub, and continuously optimize and improve the reliability and economy of China-made commercial aircraft, in order to promote the economic and social development and provide more convenience for travellers.