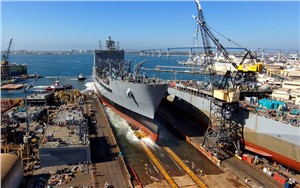 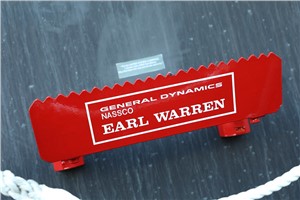 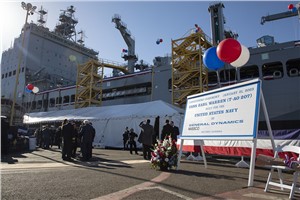 “Along with its namesake, this majestic vessel will be instrumental in shaping the future of our nation. The shipbuilders of NASSCO are proud to have ensured Earl Warren’s legacy will live on in this ship,” said David Carver, president of General Dynamics NASSCO. “On behalf of the 48-hundred employees of General Dynamics NASSCO, I am proud to present the USNS Earl Warren for christening to our sponsor the Supreme Court Justice, Elena Kagan.”

The ship honors Earl Warren, 14th Chief Justice of the United States of the Supreme Court. During his 16 years as Chief Justice, a period of time when the Supreme Court was known as the “Warren Court”, civil rights and civil liberties were dramatically expanded, marking this period as one of the most important periods in the history of American constitutional law.

“Indeed, the ship’s motto could not be more appropriate: ‘I Will Find a Way or I Will Make One,’” said Del Toro. “That’s exactly what a young Earl Warren did when he overcame obstacles to joining the Army during the First World War, and that’s what he continued to do in the fight for equality, democracy, and social justice throughout his life.”

General Dynamics NASSCO was awarded with a contract to design and build the first six ships, T-AO 205 – T-AO 210, by the U.S. Navy for the next generation of fleet oilers, the John Lewis-class in 2016. In 2022, the Navy awarded NASSCO with a contract modification for the construction of two additional John Lewis-class fleet oilers (T-AO 211 and 212), with the option for the Navy to procure an additional oiler, T-AO 213 which was included in the 2023 defense budget.

The 742-foot-long oilers are designed to transfer fuel to U.S. Navy carrier strike group ships operating at sea and have the capacity to carry 157,000 barrels of oil, a significant dry cargo capacity, aviation capability and up to a speed of 20 knots.

Tell a friend:
GD NASSCO Christens the 3rd Ship in the T-AO Fleet Oiler Program for the US Navy