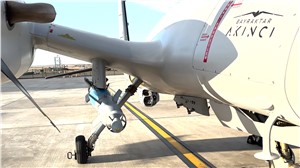 The drone’s developer Baykar shared the development on Twitter.

The laser guidance kit was integrated with a MK-82 bomb, also developed by Aselsan, and was used in the test firing. The kit converts 227-kilogram (500-pound) MK-82 and 2-ton MK-84 dumb bombs into cost-effective and highly reliable smart weapons.

According to the company, it provides increased accuracy, delivery range, reduced collateral damage and after-release re-targeting capability against both stationary and moving targets.

The kit comprises a semi-active laser (SAL) seeker, a guidance section, a thermal battery, a canard control system and a rear wing.

It reduces the number of munitions required to destroy a target and features accuracy, reliability and cost-effectiveness, previously unattainable with conventional weapons.

The Akinci will be equipped with the locally made active electronically scanned array (AESA) radar and air-to-air missiles Gökdogan and Bozdogan and will launch several types of locally made ammo, such as standoff missiles (SOM).

The landmark combat drone has most recently undergone another firing test with a new generation guidance kit, domestically developed by the Turkish defense industry.