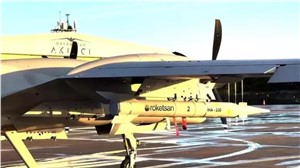 TRG-230 air-to-surface hypersonic missile developed by Türkiye’s rocket producer Roketsan successfully struck its target from a distance of over 100 kilometers.

Bayraktar Akinci, developed by Baykar Technologies, is a drone capable of conducting operations that are performed with fighter jets.

“Bayraktar Akinci has hit its target with the TRG-230, Türkiye’s first hypersonic missile developed by Roketsan, from a distance of 100 kilometers,” Selçuk Bayraktar, the company’s chief technology officer.

The first ballistic supersonic missile launched from air to land in Türkiye took off from the northwestern province of Tekirdag’s Çorlu district and covered a distance of about 700 kilometers and reached the outskirts of the Black Sea province of Sinop.

The missile, which has an effective range of between 20-150 kilometers (12-155 miles), maintains its high sensitivity in case of GPS interference, and can also engage fixed targets, according to the producer.

TRG-230 is aimed to be used in artillery and air defense systems, radar stations and logistics facilities.

According to local reports, the company has made a deal with three countries for the sale of Bayraktar Akinci.

On July 8, it broke an altitude record in Turkish aviation history by climbing up to 38,039 feet in its flight that lasted 25 hours and 46 minutes. Akinci, which has made 874 sorties in test and training flights so far, hit the targets with full accuracy in the firing test on July 5 with warhead ammunitions MAM-C, MAM-L, and MAM-T, also developed by Roketsan.

The Turkish drones got worldwide fame amid the Second Nagorno-Karabakh War that broke out on Sept. 27, 2020, between Armenia and Azerbaijan.

Türkiye, as a rising drone power in the international arena, took on a game-changing role in the region by supplying its ally Azerbaijan with UAVs for use in the conflict and significantly contributed to Azerbaijan’s victory.