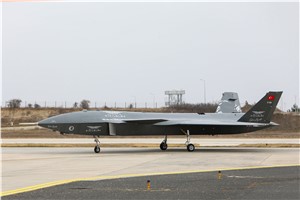 Then, the first test runs without safety ties was directed by Selçuk Bayraktar, the company’s chief technology officer.

Kizilelma is planned to make a difference on the battlefield especially with its “landing and take-off capability on ships with short runways.”

Developed considering short-runway ships such as the TCG Anadolu, Türkiye’s first LHD-class vessel, the fighter jet will play an important role in overseas missions thanks to this feature. It will have a low radar signature thanks to its design.

Kizilelma will be able to carry 1,500 kilograms of payload (weapons and devices, etc.). Its flight range is 930 kilometers, while the operating altitude was declared as 10,668 meters. It can operate in the air for five hours and has a maximum speed of 900 km/h.

It will be equipped with the locally made active electronically scanned array (AESA) radar.

Unlike unmanned aerial vehicles, Kizilelma will also provide effectiveness against air targets with domestic air-air munitions. With these abilities, it will change the balance on the battlefield.

It was showcased at Teknofest, Türkiye’s largest aerospace and technology festival, in the northern province of Samsun, attracting great attention despite ongoing design and development efforts.

The first flight of Kizilelma is expected to take place in 2023, according to Bayraktar.

The Turkish drones got worldwide fame amid the Second Nagorno-Karabakh War that broke out on Sept. 27, 2020, between Armenia and Azerbaijan when Türkiye, a rising drone power in the international arena, supplied its ally Azerbaijan with UAVs for use in the conflict and significantly contributed to Azerbaijan’s victory.