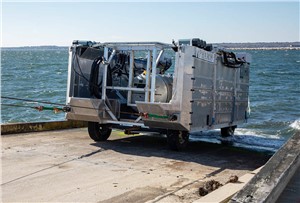 “We are very proud to have worked with talented Navy warfare centers (Naval Surface Warfare Center Panama City Division in Florida and Division Newport) to advance Pharos capabilities,” said Jim LaCroix, director for advanced technology at HII. “The Navy and industry team did a great job addressing the challenges and completing a successful demonstration.”

“It’s encouraging to see new opportunities that facilitate use of the vehicle in the field,” said Allison Phillips, Division Newport’s test and evaluation lead for the Snakehead LDUUV.

“This successful demonstration emphasizes that collaboration with the government and industry is key to build and test innovative solutions to increase the operational value that Large UUVs bring to the fleet.”