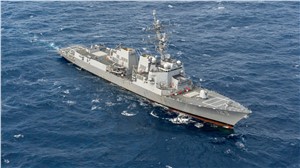 During the sea trials, the team successfully accomplished the hull, mechanical, and electrical tests, conducted the first in class Flight III events with the SPY-6 arrays and tested the machinery control system to ensure remote operability of the new electric plant.

“Getting DDG 125 underway is a significant milestone in keeping this first Flight III ship on schedule, and reflects the hard work and dedication of our combined Ingalls and Navy team to ensure a successful sea trials,” Ingalls Shipbuilding President Kari Wilkinson said. “We are all very happy with how DDG 125 performed, and we look forward to delivering this highly advanced ship to the Navy.”

Ingalls has delivered 34 destroyers to the U.S. Navy, with five currently under construction including DDG 125, Ted Stevens (DDG 128), Jeremiah Denton (DDG 129), George M. Neal (DDG 131) and Sam Nunn (DDG 133). Lenah Sutcliffe Higbee (DDG 123) was delivered to the Navy by Ingalls on Nov. 30 and will leave the shipyard early next year.

Arleigh Burke-class destroyers are highly capable, multi-mission ships and can conduct a variety of operations, from peacetime presence and crisis management to sea control and power projection, all in support of the United States military strategy. Guided missile destroyers are capable of simultaneously fighting air, surface and subsurface battles. The ship contains a myriad of offensive and defensive weapons designed to support maritime defense needs well into the 21st century.