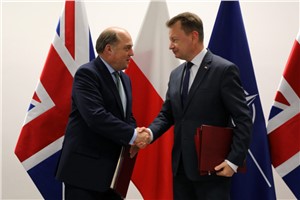 MBDA welcomes the signing, on 4th October, of a Polish-UK governmental agreement to co-operate on air defence missiles and outlining the scale of industrial co-operation for the NAREW ground based air defence (GBAD) programme.

The signing at the Zamosc Military Base in Poland came alongside Poland declaring the receipt of the equipment for the first Firing Unit of the Mala NAREW GBAD system, using MBDA’s CAMM missile and iLaunchers.

Chris Allam, Managing Director of MBDA UK, said: “To deliver Mala NAREW to Poland in such an extremely short timeframe is a remarkable achievement, and we are very proud that this has been accomplished through our very close partnership with PGZ and thanks to strong support from the UK Government. Today’s governmental agreements launch the next step in Polish-UK missile co-operation, and underpins the PGZ-MBDA technology transfer proposal on Narew, while also supporting Pilica+, Miecznik, Ottokar-Brzoza, and other vital projects.”

MBDA is currently working with PGZ to create an enhanced sovereign missile capability in Poland backed by transfer of knowledge and technology from MBDA to Polish defence industry. This joint working is expected to provide decisive military capabilities to Poland, drive significant value for money and provide a boost to the Polish economy and generate high-skilled jobs.

The Mala NAREW system, with its integration of Polish SOLA radar stations and C2 systems with CAMM missiles, provides an important stepping-stone to the main NAREW programme while also de-risking CAMM’s use with the Pilica+ upgrade project.