Hensoldt Launches its Latest Solutions to Detect and Protect

Hensoldt Launches its Latest Solutions to Detect and Protect on Land 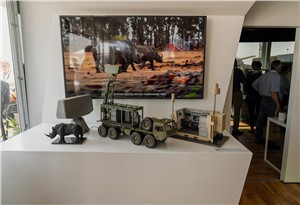 HENSOLDT offers platform-independent solutions across land, air and sea and launched its latest products for each of these domains at the 2022 edition of the African Aerospace and Defence Expo, underway at Air Force Base Waterkloof, Pretoria, South Africa. Focusing on the land domain on the second day of the show, HENSOLDT launched its new-generation solutions for radar surveillance and radar electronic support, while also highlighting the company’s innovative contribution to wildlife protection.

Quadome Land is aimed at the global market for tactical ground-based air defence radar systems, deployed in the air defence or coastal surveillance roles. Because of its compact size, relatively low mass and excellent price-performance ratio, the radar offers 3D air surveillance and air defence capabilities that are highly mobile and easily deployable.

The development of Quadome is undertaken in South Africa through a close collaboration between HENSOLDT South Africa and the Council for Scientific and Industrial Research (CSIR). It is currently the largest defence radar development programme in South Africa. “Not only is a Quadome a world-class product that will revolutionise the radar landscape worldwide, it also makes a significant contribution to the technology available to detect and protect our own borders and seas in the South African defence landscape,” says van der Watt.

The RES9000 complements HENSOLDT’s extensive tactical electronic warfare portfolio.  Collected information on surface-based and airborne search and targeting radars can now be fused together with intercepted electronic communications information to provide a collated and concise overview of the electronic order-of-battle (EOB) to battlefield commanders for decisive operational command and control.

“Being well known in the spectrum dominance field, GEW has recognised that the boundaries between the communications domain and the radar domain are fusing; and our customers no longer focus on each domain separately. With this trend in mind, we have developed a modern and compact radar electronic support solution that is closely integrated with our tactical EW systems to create a complete electromagnetic intelligence solution, which we believe will offer significant value to our customers in dealing with their electro-magnetic threats”, said Christo Fouché, the Chief Executive Sales and Marking of HENSOLDT GEW.

The specially developed system combines a number of advanced sensors, including optical and radar sensors, to monitor the rhinos, farm and surrounding areas. Data from these sensors are fused using advanced analytics at a command-and-control centre to provide complete situational awareness and early warning of potential poachers approaching the area.

“We are honoured to be part of important initiatives such as the conservation of our wildlife and we aim to expand our efforts”, says Hennie Venter, Chief Executive of the HENSOLDT South Africa GEW business unit. “Join us in supporting and advocating important initiatives such as the protection of our majestic animals. Responsible companies’ actions flow from its responsible individuals”, adds Venter. The know-how acquired through these projects can be applied for protecting other wildlife and national parks to safe-keep endangered species such as lions, elephants and even abalone.

Through its business units, GEW, Radar and Optronics, HENSOLDT South Africa delivers solutions to clients across the world and significantly contributes to South Africa’s export industry, while it is firmly grounded in its roots as a proudly South African company, operating in South Africa for South Africa.

Tell a friend:
Hensoldt Launches its Latest Solutions to Detect and Protect on Land