HMAS Canberra Stows an Osprey for The 1st Time at Sea

HMAS Canberra Stows an Osprey for The 1st Time at Sea 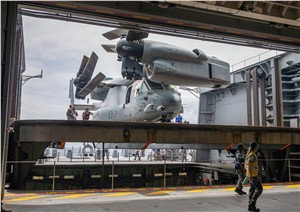 Royal Australian Navy landing helicopter dock HMAS Canberra (L02) embarked two MV-22B Osprey military aircraft onboard and successfully moved the Osprey off the flight deck into the hangar for the first time at sea during Rim of the Pacific 2022.

The MV-22B's will operate from Canberra for the duration of RIMPAC in another first for the ship. Twenty-six nations, 38 ships, three submarines, more than 170 aircraft and 25,000 personnel are participating in RIMPAC from June 29 to Aug. 4 in and around the Hawaiian Islands and Southern California.

The world's largest international maritime exercise, RIMPAC provides a unique training opportunity while fostering and sustaining cooperative relationships among participants critical to ensuring the safety of sea lanes and security on the world's oceans. RIMPAC 2022 is the 28th exercise in the series that began in 1971. (Story by Royal Australian Navy Lieutenant Nancy Cotton)

HMAS Canberra has embarked two MV-22B Osprey Military Aircraft and their crew onboard, flying onto the deck during the first week of the sea phase of Rim of the Pacific (RIMPAC) 2022.

The aircraft are onboard for the duration of the tactical phase and are one in many types of helicopters to land and take off from Canberra’s flight deck during the exercise.

A team of staff from the Aircraft Maintenance and Flight Trials Unit (AMAFTU) have embarked for RIMPAC and, in a first for Canberra, the aircraft have been moved and stowed onboard.

Australian Army Major David Ellson said what the unit is achieving has taken some work by AMAFTU to get to this point but is important for future capability and a great achievement to see.

“This is the first time at sea we have taken a MV-22B down from the flight deck onto the elevator lift and into the hangar,” Major Ellson said.

“It all forms part of the trials for AMAFTU to enable coalition aircraft to routinely embark on our ships.

“The evolution to move and stow the MV-22B involved approximately ten crew and provided an opportunity for AMAFTU and the MV-22B crew to observe which is what this phase of RIMPAC is about, the interchangeability between Australia and coalition nations such as the United States.

Canberra has not only embarked the two aircraft but their pilots, ground crew and maintainers. The 25 members are living onboard and integrating into life with fellow Aussies.

“Moving and stowing the Osprey was done at a careful slower pace with our Canberra crew working alongside the Osprey crew as it’s a big aircraft and the crews have not done this at sea, we needed to ensure the aircraft could be stowed inside the ship and achieved safely.

“It’s good to see this being accomplished and was a great moment for all those involved, it’s always a sense of achievement to be involved in a ‘first’ for the ship.”

HMAS Canberra will continue to conduct air operations at sea with international partners and allies as part of RIMPAC 2022.

Tell a friend:
HMAS Canberra Stows an Osprey for The 1st Time at Sea