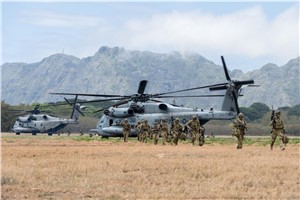 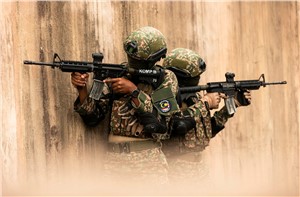 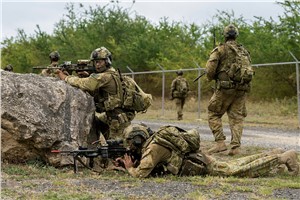 A fictional village bustles with the chatter of role players and enemy party as Australian and Tongan infantry teams wait, unseen, outside the walls, ready to attack.

Called in by a team of Australian Army and United States Marine Corps reconnaissance soldiers, the landing force arrived.

Green figures donned with helmets and rifles ran down the ramp of a whirring helicopter, dust stirring at their feet.

The reconnaissance team led the way as a company of soldiers patrolled through the jungle toward the village. Rifles in hand, they were ready to put their urban close combat training into action.

Their aim was to master the element of surprise.

Together, His Majesty’s Armed Forces from Tonga (HMAF) and Australian Army teams were tasked with pushing the enemy out of fictional village three, their counterparts from nations across the Pacific tackling number one and two.

Australian Army Lieutenant Colonel Mark Tutton said he was impressed at the team's professionalism in training.

“Australian and Tongan teams have been training together for almost two months now. Their camaraderie and cohesiveness really shows on the battlefield in an exercise like this,” Lieutenant Colonel Tutton said.

“Urban close combat is perhaps the most difficult and dynamic infantry operating environment. It’s a three-dimensional battlespace, 360 degrees and operating 24/7.

“In any one moment in time, our members will be providing humanitarian assistance, conducting peacekeeping operations and fighting a lethal battle all within the same day. It’s complex; your ethical decision making is really tested.”

“The boys went through clear and secure tasks throughout a complex urban area for the first time with live enemies and role players. The sound effects made the environment more confusing and interesting,” Lieutenant Filise Siale said.

“It was a great experience for the boys, which adds to their individual skills and on the other hand, shows where there is room for improvement.”

For the days following the activity, the teams continued working together in the United States Marine Corps facility to perfect their skills.