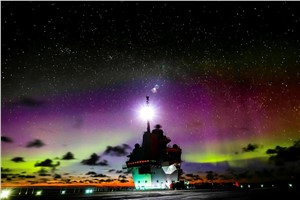 The UK has announced an increased contribution to NATO as the Prime Minister and Defence Secretary attend the NATO summit in Madrid.

Defence Secretary Ben Wallace MP said:
"We have always been clear that our strength and security comes from our alliances, and NATO is at the heart of that."

"The New Force Model and our presence in Estonia will ensure that the Alliance is able to respond at pace, helping to determine stability across Europe in the decades to come."

NATO has introduced the New Force Model in support of Leaders’ decision to modernise and strengthen the NATO Force Structure for the future. Allies will declare capabilities, equipment and forces available to support SACEUR, ensuring they are in the right place at the right time. This will allow the Alliance’s military command to plan for emerging threats, safe in the knowledge that these assets will be available to take part in the Alliance’s response.

The UK will also contribute to the new Allied Reaction Force: an agile, multi-domain and combat-effective force ready to deploy at very high readiness and to respond to a range of crises.

It comes as the Alliance has agreed a new posture of stronger forward defences to reflect the radically changed security context since Russia’s unprovoked invasion of Ukraine.

In response to Russia’s invasion of Ukraine, the UK increased its presence in Estonia to include the temporary deployment of a second battlegroup, doubling the total number of deployed personnel to over 1,600. The lethality of these deployments will be enhanced with advanced capabilities including helicopters and artillery systems. Meanwhile, the UK’s existing HQ in Tallinn will be expanded. Led by a Brigadier, it will support the rapid deployment of high readiness forces at the brigade level.

The UK will also support Estonia with training and logistics, the development of its first divisional-level HQ, as well as developing new ways of fighting through their joint hosting of the Defence Innovation Accelerator for the North Atlantic European HQ, and supporting innovative dual use start-ups through the NATO Innovation Fund.

In addition to increasing its deployments to Estonia, since the Russian invasion the UK has also deployed hundreds of troops to Poland and sent more aircraft to conduct air policing in Romania. Meanwhile, HMS Prince of Wales has led the Alliance’s Maritime High Readiness Force since January 2022.