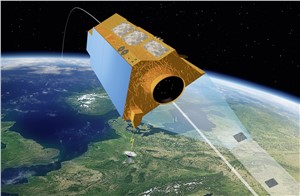 The Airbus-built "SARah-1" Earth observation satellite, under subcontract to OHB System AG, has been transported from Friedrichshafen, Germany, to Vandenberg, California, USA, and is currently being prepared for launch in June 2022 and subsequent operation by Airbus in space.

SARah is a new operational reconnaissance system consisting of several satellites and a ground segment, which was developed on behalf of the German Bundeswehr. As the successor system, it replaces the SAR-Lupe system currently in service and offers significantly enhanced capabilities and system performance.

Overall responsibility for the complete SARah system lies with OHB System AG, Bremen, as prime contractor, which holds the main contract from the Federal Office of Bundeswehr Equipment, Information Technology and In-Service Support (BAAINBw). Airbus is the main subcontractor. The architecture of the overall SARah system consists of a space segment with three radar satellites (2 x OHB, 1 x Airbus) and a ground segment connected to two ground stations.

Airbus Defence and Space in Friedrichshafen developed the satellite with the latest, highest-resolution radar technology as well as jointly developing the ground segment to operate its own satellite. The company is also responsible for the launch, calibration and validation of the radar satellite, with final in-orbit delivery.

The radar instrument developed and built by Airbus features a sophisticated active phased array antenna and represents a further development of the Airbus-built TerraSAR, TanDEM-X and PAZ Earth observation satellites already successfully operating in orbit. This technology offers the advantages of very fast pointing and very flexible shaping of the antenna beam to deliver imagery in record time.

In general, radar satellites, with both passive and active antenna technology, allow observation of the Earth's surface regardless of the time of day or weather conditions.

The satellite, built by Airbus, weighs around four tons and will be launched from Vandenberg, California, USA.

The launch and commissioning (LEOP) of the satellite will be supervised from Airbus' control centre in Friedrichshafen. The subsequent calibration, validation and operation will be carried out from the Bundeswehr control centre.