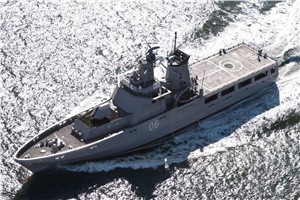 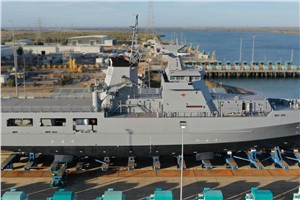 Arafura class offshore patrol vessel (OPV), NUSHIP Arafura, was launched today at the Osborne Naval Shipyard in South Australia – the first in a fleet of 12 OPVs being built for the Royal Australian Navy to replace the Armidale and Cape class patrol boats.

Minister for Defence the Hon Peter Dutton MP said the launch of NUSHIP Arafura was a step forward in protecting Australian borders and offshore interests, providing increased maritime patrol and response capability and interoperability with Australian vessels and regional partners.

“The Arafura class OPVs represent the future of Australia’s border protection and will be the primary asset for maritime patrol and response duties,” Minister Dutton said.

“Our commitment to a secure, stable and prosperous region will be bolstered by the introduction of these vessels, with state of the art sensors and command and communications systems.

“The build of the Arafura class OPVs is a cornerstone of the Australian Government’s Naval Shipbuilding Plan, which will employ 15,000 workers across the country by 2030.”

Minister for Defence Industry Melissa Price said the launch of the first Arafura class OPV was a significant milestone in the Government’s Naval Shipbuilding Plan.

“We are committed to a sovereign continuous naval shipbuilding program and I congratulate Australian industry and the workforce involved in building NUSHIP Arafura,” Minister Price said.

“It is a demonstration of Australia’s continued strengthening of our defence capability and epresents a $4.7 billion investment in our defence industry.

“Australian industry is building all 12 vessels here in Australia and will continue to sustain them over their lifecycle, delivering long-term local jobs.”