This news is classified in: Defense Sensors 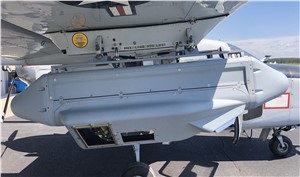 Logos Technologies LLC, a leading developer of wide-area motion imagery (WAMI) systems, announced today that, with the successful test flight of the Spectral and Reconnaissance Imaging for Tactical Exploitation (SPRITE) POD earlier this year, has met all the goals of its five-year contract with the Office of Naval Research.

"Operator Viewing Imagery During Flight TestingWe had SPRITE flying between four and five hours a day for a whole week," said Chris Stellman, lead principal scientist and program manager for Logos Technologies. "We were able to use SPRITE’s sensor modalities to detect signatures of interest, process that data on the fly, and stream it down in real time to users on the ground."

"The MMEP is the brains of the SPRITE pod," Stellman said. "It’s what makes data actionable to the warfighter and searchable to the analyst."

Though the Office of Naval Research contract required a specific set of sensors, the MMSP is very flexible regarding the payloads it can house. For example, instead of a hyperspectral sensor, it could include LIDAR or a signals intelligence package, depending on customer need. And at the upcoming Association of the United States Army (AUSA) Annual Meeting & Exposition, in Washington, D.C., Logos Technologies will be showcasing the now-proven SPRITE pod and talking to interested parties about the MMSP.