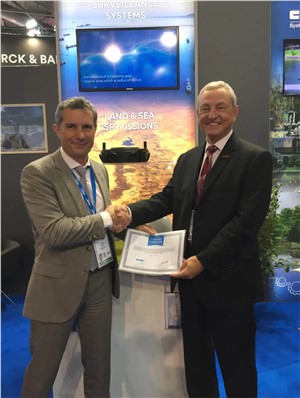 Logos Technologies, a leader in wide-area motion imagery (WAMI) systems, announced today that it has signed a partnership agreement with CNIM Air Space, a French supplier of tethered aerostats and drone airships for homeland security and military operators, at Eurosatory 2022.

“We are very excited about this agreement,” Alan Murdoch, VP of International Programs for Logos Technologies. “Our WAMI systems have already been employed on lighter-than-air platforms by operators like the U.S. military in Afghanistan and Iraq, and the Brazilian police during the Rio Olympics. This latest collaboration with CNIM Air Space will provide even more opportunities.”

Logos WAMI systems allow a single operator to image a city-sized in medium resolution. That’s enough to allow the user to detect and track multiple, geographically dispersed moving targets at the same time, as well as cue nearby high-resolution video cameras to make positive identifications.

In addition, the system records everything being monitored, allowing for a powerful forensic replay capability that connects events, people, and places in ways that would have been impossible previously.

Originally designed for use on small, tethered drones, the ultra-small MicroKestrel WAMI system provides 180- or 360-degree coverage (depending on whether one or two sensor pods are employed) of an area up to 20 square kilometers in size. It is also available in short-range and long-range versions.

“We are interested in WAMI because, combined with our platforms, customers will be able to surveil large areas over long periods of time from our lighter-than-air platforms,” said Gaetan Breurec, CEO of CNIM Air and Space. “And with a maximum weight of 5 kilograms for the two-podded, 360-degree configuration, MicroKestrel is an especially attractive payload.”

CNIM Air Space hosted an official signing ceremony at its stand during the Eurosatory 2022 Defense and Security trade show, where the MicroKestrel WAMI system was also on display.