Navy Seeks to Unleash the Potential of Unmanned Systems 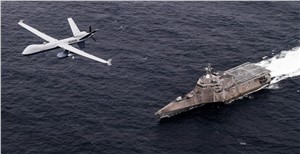 The Department of the Navy (DoN) is producing an after-action review of the U.S. Pacific Fleet-led Unmanned Integrated Battle Problem 21 (IBP21), an exercise held April 19-26 in San Diego, California.

“Advancements in technology have created the opportunity to provide our military with an operational advantage by developing improved manned/unmanned command and control capabilities,” said Dorothy Engelhardt, director of unmanned systems for the deputy assistant secretary of the Navy for Ships. “This enables our military to be more agile, lethal and decisive.”

“Large-scale exercises such as IBP21 are critical for the Navy and Marine Corps to make the transition to a hybrid manned-unmanned force in the future,” said Chief of Naval Research Rear Adm. Lorin C. Selby. “These demonstrations ensure what works in theory will work in the fleet—in an environment that is messier, dirtier and wetter than a lab. They also allow us to get valuable feedback from the Sailors and Marines themselves.”

Many of the platforms tested in IBP21 were supported by the Naval Research Enterprise (NRE), which Selby commands. Comprising the Office of Naval Research (ONR), ONR Global (the command’s international arm) and the Naval Research Laboratory, the NRE is tasked with providing the capabilities and long-term vision ensuring U.S. naval dominance today and into the future.

The purpose of IBP21 was to explore a variety of questions about how unmanned systems can be incorporated into fleet operations. For example: How can unmanned and manned systems work together effectively in diverse warfighting scenarios? How can you integrate unmanned systems seamlessly into existing platforms? What is the best way to train Sailors and Marines to use such complex, evolving technologies?

So far, major takeaways from IBP21 include: Unmanned systems are resilient, enable better beyond-line-of-sight targeting, and improve battlespace awareness and command and control. They also provide significant advantages in ISR (intelligence, survival, reconnaissance) and Targeting and Fires capabilities, without creating additional risks to the mission or warfighters. The result—more effective offensive and defensive postures.

The testing of new unmanned technologies reflects the Navy and Marine Corps’ commitment to rethinking concepts of operations, as noted in the widely publicized naval document “Unmanned Campaign Framework,” which was recently released by the DoN.

Since the completion of IBP21, naval leaders, scientists and engineers have assessed what worked, what didn’t and future actions for accelerating unmanned capabilities to the fleet and force.

These future steps include:

From By Warren Duffie Jr., Office of Naval Research

Tell a friend:
Navy Seeks to Unleash the Potential of Unmanned Systems