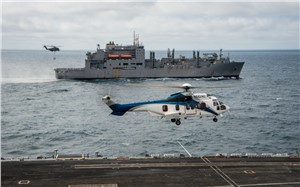 The Navy took another critical step forward in the future of the F-35C Lightning II joint strike fighter on March 6.

The Nimitz-class nuclear aircraft carrier USS Carl Vinson (CVN 70) conducted a vertical replenishment at sea, simulating the ability to transfer an F135 jet engine from a supply ship on board the aircraft carrier using helicopters.

During the event, two helicopters transported a load simulator, measured to match the weight of an F135 engine power module, from the dry-cargo ammunition ship USNS Richard E. Byrd (T-AKE 4) to Vinson’s flight deck. This was significant because it provided proof-of-concept that the Navy’s deployed aircraft carriers will be able to receive critical parts to successfully maintain the F-35C at sea.

“What we’ve accomplished here ensures that our fleet will be capable of utilizing the latest in cutting-edge, warfighting technology in future joint strike fighter deployments. With every success, we improve our readiness and maintain our capability to defend our nation and allies against any adversary.”

In a vertical replenishment, aircraft use underbelly slings to transport loads from Military Sealift Command (MSC) replenishment ships to Navy vessels. In this evolution, a EurocopterAS332 Super Puma from Byrd and a U.S. Marine Corps CH-53E Super Stallion from Marine Heavy Helicopter Squadron 466 tested their ability to vertically transport the simulated weight of the engine.

“Being able to deliver the F135 module is one more thing the T-AKE platform can handily accomplish to support the fleet,” said Capt. Lee Apsley, Byrd’s civil service master. “This operation is another MSC first on Byrd. As always it was a pleasure to work with Carl Vinson and the Marines.”

Capable of embarking both the F-35C and the CMV-22B Osprey, Vinson is the first aircraft carrier equipped to support fifth-generation aircraft. The vertical replenishment exercise follows more than six months of successful integrated operations between the carrier and air wing in support of the unique maintenance and tactical operations functions of the advanced aircraft.

“We have been planning, preparing, and training for this event for months,” said Cmdr. Melissia Williams, Vinson’s supply officer. “That careful planning paid off today and I’m proud of how our teams came together for a safe and successful evolution.”

In February, another replenishment exercise was conducted by Fleet Logistics Multi-Mission Squadron (VRM) 30 and members of Carrier Air Wing Two using the new CMV-22B Osprey to deliver an F135 from a shore-based location to Vinson.

“Using the Osprey, and now a vertical replenishment from a supply ship, ensures we are prepared to quickly and easily deliver these parts to our ships in the fleet, giving us one more tool in our tool box in support of a high operations tempo,” said Cmdr. William Gray, Vinson’s maintenance officer. “Today’s success provides an additional option when replenishing parts to maintain the F-35C Lightning II while underway.”

The F135 is the basis for the single engine of the F-35C Lightning II, the only single-engine fixed-wing jet on board Vinson, and the latest aircraft in the Joint Strike Fighter group.