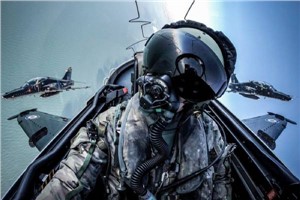 Transforming Training for the Future Fight

We are delighted to host a series of online discussion groups.

Taking place on December 7, the virtual discussion groups will bring together senior figures from international air forces and leading industry to explore the transformation of training for future operations in the air domain.

Chaired by Lt Gen (Ret'd) Tony Rock and Air Marshal (Ret'd) Stuart Evans, the online discussion groups will provide a touch-point for the military flight training community at a time when face to face engagement is difficult to arrange. Attended by Heads of Training and capability planners, the virtual discussion groups will address outsourced training, technologies to mitigate the pilot shortage, immersive solutions & VR, simulation & LVC, trainer aircraft requirements, and the transformation of the training syllabus for the next generation of airmen.

Recognising the strategic imperative to innovate through collaboration, the virtual discussion groups will provide a forum for knowledge sharing, network expansion, and international cooperation. The discussion groups will focus on the most pertinent elements of the MFT conference, set the scene for the physical event, and foster new partnerships ahead of physical iteration

Lieutenant General (Ret’d) Anthony J. Rock, Inspector General, U.S. Air Force (2016 –2017), US Air Force
General Rock graduated from the University of Texas at San Antonio and earned his Air Force commission through Officer Training School. During his career, he has commanded a fighter squadron, a center, and fighter and air expeditionary wings in Idaho and Iraq. He has held staff assignments at the Joint Warfighting Center, Air Combat Command, U.S. Northern Command, U.S. Forces Iraq, the Air Staff, and the Joint Staff. General Rock was Chief, Office of the Defense Representative, Pakistan. General Rock’s final assignment was as the Inspector General of the Air Force, Office of the Secretary of the Air Force. In this capacity, he reported to the Secretary and Chief of Staff of the Air Force on matters concerning Air Force effectiveness, efficiency and military discipline. The general is a command pilot with more than 4200 flying hours, incl150 combat hours in F-15C.

Air Marshal (Ret’d) Stuart Evans, Deputy Commander (2016-2019), NATO Allied Air Command
Air Marshal Evans joined the RAF in 1983 as a pilot. He commanded IX(B) Squadron (Tornado GR4) at RAF Marham. Staff tours have included the Weapons and EW post in HQ Number 1 Gp and in the Directorate of Operational Capability Audit team at the MoD. He also served as the first RAF member within the Strategic Studies Group working directly for the Chief of the USAF, followed by a tour at the Defence Doctrine and Concepts Centre as Head of Joint Doctrine. He became the Commandant of the Air Warfare Centre in July 2011, followed by an overseas deployment as the CAOC Director, 603rd AOC in 2013. Prior to assuming the appointment of Senior British Military Advisor to US Central Command in Florida in 2014 as an Air Vice Marshal he served within the Joint Forces Command at Northwood. On promotion to Air Marshal, his final assignment was as Deputy Commander of NATO’s AIRCOM.