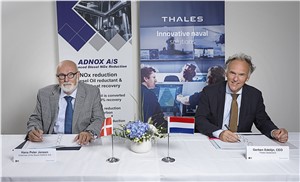 Thales in the Netherlands specializes in the design and production of advanced sensors, and command and control systems for defense and security applications, in particular in the naval domain. As the electronic combat systems installed on a naval vessel contribute to a significant part of the total power consumption, Thales is investing a significant effort into a number of measures to reduce the impact on the environment, which is derived from the production and operation of its systems.

ADNOX A/S has developed and patented a catalytic converter-based system, which uses normal diesel oil to convert the dangerous nitrogen compounds (NOx), which are formed in diesel engines, into water and nitrogen. The traditional catalytic convertor system uses urea for the conversion. Urea is better known as AdBlue from the car industry.

Since diesel oil is already present and delivered to ships, the new ADNOX system no longer requires additional transport and storage of the substance. The ADNOX system can be used on both two-stroke and four-stroke engines. The energy from the consumed oil is converted into heat, which can be used for the production of electricity or water onboard the ship. The system is approved in principle by DNV-GL for use on ships.

Gerben Edelijn, CEO of Thales in the Netherlands, says: “ADNOX has laid the foundation for an exciting new technology, which Thales will now help further develop to create value for our customers in the naval domain. We are proud to work together with ADNOX to help our naval customers to realize their ambitions in reducing NOx and CO2 emissions from naval operations.”

Hans Peter Jensen, Chairman of the Board of ADNOX A/S, says: “Our goal in ADNOX is to make a positive impact on the environment with a green solution to NOx reduction. With our newly entered co-operation with Thales, we have established the possibility to introduce our technology to the naval market. Thales is well known and respected within the naval industry and we are confident that this cooperation will be mutually beneficial for our two companies”.