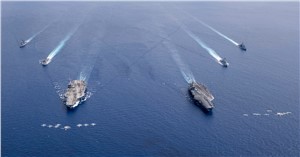 Under the contract, SAIC will deliver engineering, technical support, analysis and modeling, studies, inventory and logistics, and quality assurance services in support of tactical intelligence, surveillance, and reconnaissance systems at the system, subsystem, and component levels.

“For more than 30 years, SAIC’s roughly 550 employees in Crane have helped to equip the warfighter with the solutions they need to be successful and to ensure mission readiness around the world,” said Jim Scanlon, SAIC executive vice president and general manager of the Defense Systems Group. “We are excited to continue our work advancing complex missions for the Navy.

NSWC Crane also works to apply component and system-level product and industrial engineering to surface sensors, strategic systems, special warfare devices and electronic warfare systems, as well as to execute other responsibilities as assigned by the Commander, NSWC.

The renewed prime contract, which has a one-year base period of performance and four one-year options, covers an array of technological areas, including:

In addition to the Navy, SAIC has advanced complex missions for many other customers, including the U.S. Marine Corps, Army, Air Force, U.S. Special Operations Command, Coast Guard, NASA, and other military, civilian, and foreign military organizations.