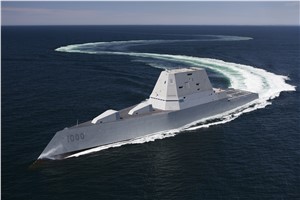 The US Navy has taken delivery of the USS Zumwalt, its first full-electric power and propulsion ship. GE’s Power Conversion business (NYSE:GE) was the designer and provider for the high-voltage system (HV), propulsion drive trains consisting of multiphase converters and Advanced Induction Motors (AIM) for the DDG 1000 class of futuristic destroyers.

With delivery, the USS Zumwalt continues to execute missions for the US Navy.

Power where it’s needed
For navies around the globe, power and energy are mission enablers, according to Kevin Byrne, who leads the North American marine segment for GE’s Power Conversion business. “Because electric power is needed for various operations and mission systems in parallel, this full-electric power and propulsion ship has the flexibility to direct energy where it is needed on the platform,” he said.

Employing GE’s innovative and Integrated Power System (IPS), the DDG 1000 has the capacity to distribute electricity across the entire ship, allowing for enhanced power flexibility for various operational requirements.

Both of GE’s drive trains have two electric motors in tandem. VDM25000 power converters with three independent channels accompany the 15-phase AIM. Each motor drive train can operate on 5, 10, or 15 phases. This provides high redundancy and is more economical when running at lower power. GE’s AIM drive train was selected to meet the requirements of the ZUMWALT Class Destroyer.

Compact enough for combatant ships and powerful enough for an aircraft carrier, AIM technology has demonstrated its performance over more than two decades on land and at sea for mechanical strength, robustness, very low maintenance, and naval performance requirements. For the full-electric propulsion system, GE leveraged its proven technologies, building from the Naval Surface Warfare Center (NSWC) land-based test site and its own Marine Power Test Facility in the UK, alongside the UK Royal Navy Type 45 program, Byrne explained. “The US Navy gets benefits from our other platforms that we then could apply to the DDG 1000 and future platforms.”

A history of innovation marks GE’s latest milestone
Recognizing that navies were demanding more energy amidst space constraints, GE has been developing its full-electric propulsion system for decades, Byrne said. With more than 100 electric and hybrid references with 15 navies globally, GE is the top electric propulsion provider to navies around the world.

Since 2007, GE has been the Original Equipment Manufacturer (OEM) for HV system, installation, commissioning and servicing for the US Navy’s three DDG 1000 class vessels. In addition to the USS Zumwalt, the USS Michael Monsoor (DDG 1001) is also homeported in San Diego and is undergoing combat systems activation. The third and final ship of the class, the future USS Lyndon B. Johnson (DDG 1002), is under construction at Bath Iron Works in Maine.