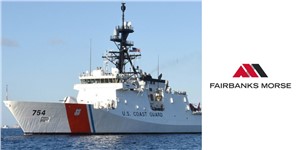 Fairbanks Morse, a leading provider of solutions that are powering the world forward, has completed the build and testing of the two main propulsion diesel engines (MPDE) for the U.S. Coast Guard’s offshore patrol cutter (OPC) #1. Fairbanks Morse was awarded contracts by the prime contractor, Eastern Shipbuilding Group, to build the two MPDE engines for both the OPC #1 and OPC #2.

“We are incredibly pleased to have successfully completed testing for our OPC engine,” said Fairbanks Morse CEO George Whittier. “We are particularly proud to work with Eastern Shipbuilding and support them in their successful build of the first new generation of patrol cutter. Together we are proud to do our part in helping the U.S. Coast Guard keep our borders safe.”

The OPC is a 360 foot-long vessel that will be powered by two FM | MAN 16V 28/33D STC diesel engines, with each engine rated 7,280 kWm (9,763 brake-horsepower) running at 1,000 revolutions per minute. These engines will be delivered to Eastern Shipbuilding Group in Panama City, Florida. The first OPC engine has been built and was delivered in January 2020. Fairbanks Morse has completed testing on the PTO engine, which is expected to be delivered to ESG in June 2020.

Joey D’Isernia, President of Eastern Shipbuilding, congratulated Fairbanks and stated, “Today marks another successful milestone in the OPC program. Our team continues to execute, and we are very pleased and excited to take delivery of and install these engines in USCGC Argus (WMSM 915). This highly durable and reliable engine will support USCG missions for the next 40 years.”

The OPC is designed to conduct missions in support of the nation’s maritime security and border protection. The OPC will provide a capability bridge between the national security cutter (NSC), which patrols the open ocean in the most demanding maritime environments, and the fast response cutter (FRC), which serves closer to shore. The OPCs conduct missions including law enforcement, drug and migrant interdiction, search and rescue, and other homeland security and defense operations.

The U.S. Coast Guard and the U.S. Navy have turned to Fairbanks Morse for over 70 years to provide quality diesel engines for marine propulsion and ship service systems, trusting in the safety and reliability of the company’s engines whether for training vessels or mission-critical warfare ships. Today, Fairbanks Morse engines are installed on approximately 80% of U.S. Navy ships that have a medium speed power application.