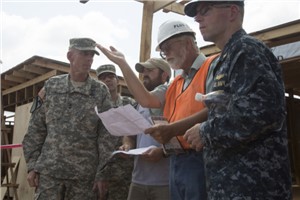 Fluor Corporation (NYSE: FLR) announced today that the Army Contracting Command - Rock Island has extended Fluor’s current Logistics Civil Augmentation Program (LOGCAP) IV contract, as the Army continues to implement the transition to LOGCAP V. Fluor will continue to provide forward operating support for Afghanistan through December 2020, for U.S. Africa Command (AFRICOM) through June 2020 or as extended until Fluor begins work on LOGCAP V, and for U.S. Southern Command (SOUTHCOM) through March 2021, or until it transitions to LOGCAP V.

“Fluor has supported the Army’s LOGCAP operations for many years and we are honored that our contract has been extended,” said Tom D’Agostino, president of Fluor’s Government Group. “The U.S. Army is one of Fluor’s most important customers, and we are ready with the resources and capabilities to deploy anywhere and at any time to support the Army’s operational objectives and to serve U.S. and coalition forces as they complete their missions in some of the most difficult and remote locations around the world.”

Established by the U.S. Army to fulfill the Department of Defense's global mission during contingency events, LOGCAP provides the military with additional capabilities to support the logistics requirements of its deployed forces rapidly through use of civilian contractors.