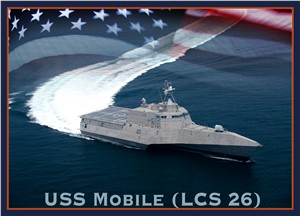 U.S. Rep. Bradley Byrne, representing Alabama’s 1st district, will deliver the christening ceremony's principal address. His wife, Rebecca Byrne, president and CEO of the Community Foundation of South Alabama, will serve as the ship’s sponsor. In a time-honored Navy tradition, Rebecca Byrne will christen the ship by breaking a bottle of sparkling wine across the bow.

“USS Mobile is a marvel of engineering,” said Acting Secretary of the Navy Thomas Modly. “She will extend our capabilities for any mission, from the middle of the ocean to the shallowest of waters, enhancing our ability to project power ashore and at sea. This Independence-class LCS will extend the maneuverability and lethality of our fleet to confront the many challenges of a complex world.”

The LCS class consists of two variants, the Freedom variant and the Independence variant, designed and built by two industry teams. The Freedom variant team is led by Lockheed Martin in Marinette, Wisconsin (for the odd-numbered hulls). The Independence variant team is led by Austal USA in Mobile, Alabama (for LCS 6 and the subsequent even-numbered hulls).

LCS 26 is the 13th Independence-variant LCS and the 26th in the class. It is the fifth ship named in honor of the port city on Alabama’s Gulf Coast. The first Mobile was a side-wheel steamer that operated as a Confederate-operated blockade runner. It was captured by U.S. forces at New Orleans in April 1862, commissioned as Tennessee and later renamed Mobile.

The second Mobile was a passenger liner operated by Hamburg Amerika Lines between Germany and the United States until the outbreak of World War I. It was taken over by the Allied Maritime Council and assigned to the United States after the Armistice and commissioned March 1919.

The third Mobile (CL 63) was commissioned March 24, 1943.  It participated in numerous campaigns in the Pacific during World War II and received 11 battle stars for her service by the time she was decommissioned May 1947.  The fourth Mobile (LKA 115) was an amphibious cargo ship that served from September 1969 until decommissioning in February 1994.