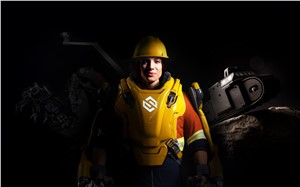 Today, Sarcos® Robotics, a global leader in the production of robots that augment humans to enhance productivity and safety, announced that an advanced prototype of its Guardian™ XO® full-body, autonomously powered robotic exoskeleton was successfully demonstrated as part of the U.S. Air Force Air Mobility Command’s Mobility Guardian 2019 exercise headquartered out of Fairchild Air Force Base in Spokane, WA. This field demonstration is yet another major milestone in Sarcos’ path to delivering the world’s first energetically autonomous full-body exoskeleton that gives the operator superhuman strength, increases endurance, and dramatically improves safety.

Sarcos began developing powered exoskeletons in the early 2000’s. Since then, it has partnered with both the Department of Defense as well as leading industrial companies to jointly develop the Guardian XO, leveraging both public and private funding to field a first-of-its-kind machine that meets the needs of defense and industrial customers alike. Sarcos also recently demonstrated various heavy-lifting tasks for representatives of the U.S. Air Force and U.S. Navy at its headquarters in Salt Lake City, including one-person simulated mounting of a 125-pound missile under an aircraft wing, lifting 110-pound pallets of full ammunition cans and lifting an 85-pound tire for attachment to a simulated truck axel, all of which can be done while enabling the human to move at regular speed with no stress or strain on the Guardian XO operator.

“Our partnership with Sarcos to rapidly develop and deliver transformational capabilities is on track to initiate field testing of the force-multiplying exoskeleton technologies in 2020,” said Dr. Alok Das, Senior Scientist at AFRL’s Center for Rapid Innovation. “I witnessed the demonstration of this impressive technology and saw first-hand the myriad ways that these wearable robots can enhance the capabilities and safety of our soldiers. The Guardian XO brings science fiction to reality."