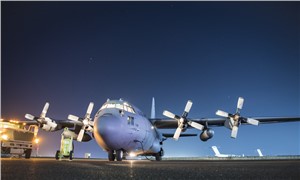 In less than two weeks, more than 100 Total Force C-130 Hercules aircraft have been cleared to return to worldwide operational duty, following a temporary removal from service Aug. 7 designed to address atypical cracks found on an aircraft.

Thanks to early detection by Air Force Materiel Command aircraft maintenance and engineering professionals and quick implementation of a fleet-wide time compliance technical order, C-130 maintainers have inspected and verified the viability of 108 of the 123 affected aircrafts’ lower center wing joints, or “rainbow fittings,” allowing for their safe return to service.

“The safety of our Airmen is our highest priority,” said Gen. Maryanne Miller, AMC commander. “We sought to address this issue with crew safety first and foremost in mind, and we’re working across the Total Force, our sister services and our industry partners to ensure all affected personnel and equipment are safeguarded.”

Miller suspended C-130 operations for 123 of the 450 C-130s following the discovery of cracks in the rainbow fitting that holds the inner and outer wing sections together. In accordance with the TCTO, in-depth visual and modified nondestructive inspections of the wing box are being conducted on affected C-130H and J-model aircraft that have not received the extended service life center wing box and have greater than 15,000 equivalent flight hours.

“This process has been swift, deliberate and effective,” said Col. Jed McCray, AMC associate director of logistics, engineering and force protection. “Of the 108 C-130s inspected, only one has been found to have a rainbow fitting crack and that aircraft will require depot-level maintenance to repair it and bring it back into service. All others have been returned to duty without issue.”

If cracking is identified during the approximately 8-hour TCTO inspections, a depot-level replacement of the rainbow fitting is required, by either flying the affected aircraft to a depot or bringing a depot team to the aircraft location, depending on the severity of the findings. Replacement of a cracked rainbow fitting will take approximately one to two months to complete per aircraft, and return to service is dependent on depot level availability and capacity.

To date, the temporary removal and subsequent reinstatement of affected AMC C-130s has not impacted ongoing C-130 support to overseas contingency operations.