Garmin Celebrates 1st Flight of G3000 in a Supersonic Tactic 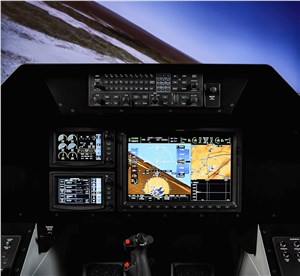 “The maiden flight of the G3000-equipped F-5 is a significant achievement as it is a testament to the rapid implementation time and flexibility afforded by a Garmin integrated flight deck,” said Carl Wolf, vice president of aviation sales and marketing. “In just under six months, Tactical Air was able to complete the engineering design, installation and achieve first flight. Through their hard work, dedication and our strong relationship together, we’re thrilled that they’re already in the air with the Garmin G3000 in this iconic aircraft. I am confident that the Tactical Air pilots will enjoy flying behind Garmin glass.”

The F-5 is a supersonic, multi-role tactical fighter and attack aircraft that in this role will provide air-to-air combat training, close-air support training, tactics development and evaluation support. The upgraded F-5 used by Tactical Air will be used in an aggressor training role and the G3000 will transform the entire fleet of Tactical Air F-5’s with sensor and system capabilities similar to current fighter aircraft.

“The first flight of the F-5 was flawless and achieved the main objective of verifying Pilot Vehicle Interface (PVI) of aircraft systems, displays, controls and the new Caution/Advisory System (CAS). The PVI and CAS, when combined with the G3000, results in a more capable fighter aircraft,” said Ken Hamm, Tactical Air chief test pilot. “As a career test pilot with over 7,000 flight hours, I have flown aircraft from the simplest to the space shuttle. Without a doubt, I can say the F-5 cockpit is one of the most capable and flexible of all.”

The modular G3000 integrated flight deck boasts a large and vibrant, high-resolution flight display that seamlessly interfaces to the F-5’s existing mission computer, enabling advanced mapping, tactical radio capabilities, radar display and more. The bezel keys, GTCs and L3 ForceX mission system serve as the pilot interface to the flight display, and the touchscreen controllers are designed so pilots can use gloves in the cockpit. The G3000 has an open architecture that enables seamless mission computer, sensors and systems interface and easily facilitates future upgrades without impacting the avionics.

The NVG-compatible G3000 contains modern, state-of-the-art synthetic vision technology (SVT™) that blends an out-the-window view of surroundings on the primary flight display, which is particularly helpful during nighttime and in mountainous environments. The G3000 also has global capabilities for communication, navigation, surveillance and air traffic management (CNS/ATM). Additional features within the G3000 integrated flight deck on the F-5 include, Terrain Awareness and Warning System (TAWS), global Automatic Dependent Surveillance-Broadcast (ADS-B) traffic and weather, as well as video interfaces.