This news is classified in: Defense MRO Navy 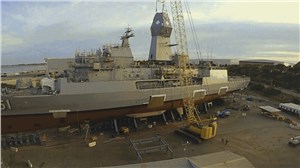 HMAS Arunta’s new mast has been installed in a major milestone as part of the ship’s Mid Life Capability Assurance Program (AMCAP) being undertaken at BAE Systems Australia’s Henderson facility.

The new mast was manufactured by BAE Systems as part of the Warship Asset Management Agreement (WAMA) between BAE Systems, SAAB Australia, Naval Ship Management (NSM) and the Commonwealth of Australia.

Around 650 people are currently working on the upgrade of the Anzac frigate fleet, including 400 BAE Systems Australia employees.

The mast installation is one of the last major works on the ship ahead of her undocking before the end of the year. She will then undertake sea trials ahead of a planned return to service in 2019.

HMAS Arunta arrived at Henderson in September 2017. As part of her upgrade, she will have:

BAE Systems Chief Executive Gabby Costigan said:
“Our Maritime Sustainment team at Henderson and Williamstown (Victoria) has established and maintained an important maritime engineering and program management capability through the sustainment of the ANZAC fleet over more than two decades through an Alliance arrangement.

“That capability is critical to ensure that the project achieves quality, cost and schedule milestones despite the enormous complexity of such work.”

HMAS Anzac has also commenced her AMCAP upgrade at our Henderson facility.