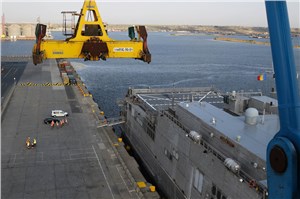 There are certain things that some Soldiers and service members may take for granted: equipment provided, a full plate of food, ammunition for their weapons. It might seem like there is a mystical force operating behind the scenes to make these resources magically appear, but it's a result of the organized, detailed planning and execution that is logistics.

Soldiers, sailors and civilians with the U.S. Transportation Command helped to further advance the efficiency of military logistics by testing a high-speed vessel to transport troops and cargo across the Black Sea, Aug. 24, 2018.

"This is a great opportunity to test this vessel and the crewmembers," said Navy Cmdr. Steven Weydert, the USNS Carson City military detachment officer in charge. "Hopefully it opens up more options for the Army and any other service to develop interoperability in this area of responsibility for multiple missions and to support our allies."

Soldiers, Abrams Battle Tanks and Bradley Fighting Vehicles departed the Poti Sea Port in Georgia on Aug. 22 aboard the USNS Carson City and docked at the Port of Constanta, Romania after a two-day voyage. The Carson City is the first high-speed vessel of its kind to travel the Black Sea in support of U.S. Army Europe operations.

Carson City (T-EPF 7) is a Spearhead-class expeditionary fast transport, a high-speed, shallow draft vessel that can hold up to 600 short tons, sail across 1,200 nautical miles (1,381 miles) at an average speed of 35 knots (40 mph). The vessel's role is to support joint and coalition force operations for the Army and Navy by transporting troops, military vehicles, supplies and equipment.

"Looking forward to future exercises being planned to take place in the Balkans as well as the Black Sea region, the T-EPF is perfect for some of those smaller ports that we want to utilize but can't get the larger ships to dock," said Lt. Col. John Hotek, commander of the 839th Transportation Battalion. "This proved that its a very viable solution, very cost effective, [and] very economical and efficient."

This proof-of-principle operation brought together two of three service component commands that make up USTRANSCOM: the Navy's Military Sealift Command and the Army's Surface Deployment and Distribution Command.

"We're trying to incorporate other services like the Navy's MSC and see how well we can use this asset to deploy and redeploy units to various exercises and real-world missions," said Sgt. 1st Class Miguel Elizarraras, cargo specialist with the 839th Transportation Battalion, 598th Transportation Brigade. "We're testing the capabilities of the vessel to transport a company-size element of infantry or mechanized units in and out of port in a faster way."

As part of the Army's Surface Deployment and Distribution Command, the mission of the 839th is to provide strategic transportation support to joint military forces throughout the Mediterranean, Caspian and Black Seas as well as the vast majority of the continent of Africa.

Equally important, the Navy's MSC has the responsibility for providing sealift and ocean transportation for all U.S. military services, as well as replenishments and controlling the military transport ships.

"I have a tendency sometimes to say 'we work in the shadows,'" said Hotek. "We are that strategic link between the tactical and operational force, and the Department of Defense's command structure that determines the movements."

The USNS Carson City's success in traversing the Black Sea will affect the planning of future exercises within the European training environment.