Soldier Communication Gets a Boost

Soldier Communication Gets a Boost 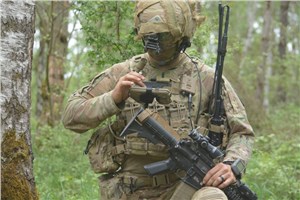 It appears that the days of simple radio communication are over for the soldiers of the 173rd Airborne Brigade Combat Team. In its place comes a sophisticated yet intuitive communication system that allows leaders at the squad level and higher to rapidly share information across the military network.

This new platform, called the Integrated Tactical Network, revolutionizes the way tactical leaders are able to communicate, improving the lethality of small units, while at the same time increasing safety and situational awareness for soldiers.

“Besides each of us having access to the mission graphics, we will be able to battle track each other,” said Army 1st. Lieutenant Michael Austin, a platoon leader in Attack Company, 1st Battalion, 503rd Infantry Regiment. “If we’re in a movement to contact and we take chance contact, we can use this to very accurately shift fires, and have more fires on the enemy while being very safe because we know our exact front-line trace.”

The benefits for soldiers in the field are extensive. With the platform, leaders are able to track the positions of the units all around the battlefield, as well as share text messages, voice communication and even pictures.

Crystal-Clear Communications
The equipment was fielded to the battalion two days prior to executing company-level combined arms live-fire exercises here May 1-5. After a one-day class, the radio telephone operators and the platoon leaders understood the process for using the devices and were able to use them for the actual exercise.

“We had crystal-clear communications the entire time and that’s the first time we’ve had that,” Austin said. “Our scouts were able to take photos directly from their hide site, so we had eyes on the objective in real-time.

The new system uses equipment that soldiers are already very familiar with, including the multi band inter/intra team radio radio to project data, and a modern smartphone for the actual interface.

“This system is simple to field and use,” said Army Capt. Michael Belina, the signals officer for 1st Battalion, 503rd Infantry Regiment “We were able to learn it at the [operator] level in one day. The software is really intuitive since most soldiers know how to use smart phones as a second nature, [so] there’s no issue with them picking up the features and figuring it out.”

Platoon leaders, fire support officers and company commanders have the devices now, but squad leaders will have the same devices soon.

Informing Soldiers, Empowering Junior Leaders
“When the platform is fully implemented, paratroopers will have an additional quality radio and access to the same common operating picture as their leadership,” Belina said. “The common soldier will have a better idea of what’s going on around him, and it will basically cut out some of the talk that is required to build that picture. It will be more immediate.”

Another benefit of the new equipment is that it simplifies the communications package for the soldier on the ground.

“It makes it so you don’t have to have a truck with a [Joint Capabilities Release] on it, with a vehicle and power to it. It takes away all that equipment and simplifies it,” said Army Sgt. Alex Jones, a retransmission team noncommissioned officer with the 1st Battalion, 503rd Infantry Regiment’s communications section.

On a less tangible level, this system empowers junior leaders to know their mission and react quickly as the situation on the ground changes.

“As an airborne unit, we already do a good job of going down to the lowest level to ensure everyone knows the plan,” Austin said. “But it’s typically just the platoon leaders and platoon sergeants and up that have the finer details. This ensures even lower levels know the plan.”

By improving communication across the formation, empowering junior leaders and ensuring soldier lethality on the battlefield, this new system shows just how the 173rd Airborne Brigade Combat Team soldiers continue to lead the force not just as fighters but also as modern, adaptable communicators on today's battlefield.

Tell a friend:
Soldier Communication Gets a Boost