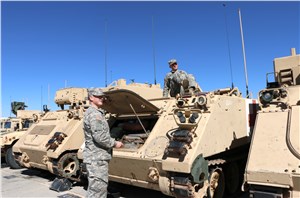 Before Soldiers can evaluate the latest version of the Army's on-the-move communications network this spring, hundreds of Army tactical vehicles are receiving technological upgrades within the Integration Motor Pool at Fort Bliss, Texas.

Preparation for the Network Integration Evaluation 16.2, also referred to as NIE, is in full swing. NIEs and Army Warfighting Assessments (AWAs) are complementary events designated to continually assess and rapidly improve the Army's communications network -- including systems that reside on tactical vehicles so Soldiers can stay connected as they cover vast distances and challenging terrain.

Engineers, technicians and Soldiers work together to accomplish the technological upgrades on vehicles in two phases. The first phase is the Golden Vehicle Build, which was completed in February and consists of creating unique prototype vehicles that carry the specific systems to be evaluated in each NIE or AWA event. The second phase is the Fleet Build, when the Golden Vehicle prototypes are utilized as the physical blueprint for the rest of the fleet.

"The ability to configure hundreds of vehicles for NIE and AWA within a few weeks is accomplished with vast preparations and a great team," said Col. Terrece Harris, director, Capability Package. "Not only do we do this in a short span of time, but we also do this twice a year. It may be tough but we keep in mind our mission is to get this equipment into the hands of our Soldiers."

The Capability Package Directorate, known as CPD, is responsible for integrating network equipment onto the vehicles utilized during NIE and AWA. It is part of the Army's System of Systems Engineering and Integration Directorate, which executes the NIEs and synchronized fielding for the network Capability Sets that are proven during the events.

Participating NIE vehicles, equipment and systems are delivered to Fort Bliss from organizations nationwide that support Army modernization. CPD brings all the efforts together by integrating platforms with communications systems, thus making them functional for the NIE's array of operational tests, evaluations, risk reduction events and demonstrations.

"Without vehicles and associated equipment, there is no NIE," said Bob Rivas, chief of CPD's System Integration Division. "We build, install, and integrate all the systems onto platforms that are going to be in the field for Soldiers to operate."

Preparing such a large number of vehicles requires a detailed schedule and logistics plan -- and the ability to adjust both on the fly.

"You need to make sure you have all the vehicles in place, the metal needed to install each system, all the cables, associated hardware, the systems themselves, and most of all you need to have flexibility," Rivas said.

While the vehicles are being integrated, Soldiers from the 2nd Brigade Combat Team, 1st Armored Division learn how to operate the technologies through New Equipment Training, or NET. Multiple classes are provided by Program Executive Offices, Project Managers and industry representatives to instruct Soldiers on how to use their equipment. Once the vehicles are built, users get additional hands-on training and reinforcement to prepare them for operational evaluations.

"Once Fleet Build comes to completion, Soldiers are able to utilize the equipment hands-on," explained Mario Hernandez, lead training specialist for CPD. "Since the technology is new, continuous training and reinforcement is necessary to ensure our Soldiers are familiar with using the equipment, and so they become more proficient before going to test."

Training is a joint effort between acquisition organizations and the Brigade Modernization Command. Together they determine which Military Occupational Specialties (MOS) need to be trained on each system, to best maximize the proficiencies of Soldiers. Bringing Army and industry instructors and Soldiers together allows for more feedback, informing the development of the technology from an experienced Soldier's perspective.

Continuously assessing technology with Soldier feedback has become crucial to modernization efforts, which is why the spring NIEs will focus on formal evaluations, while the fall AWAs will have a more experimental environment to shape concepts and requirements.