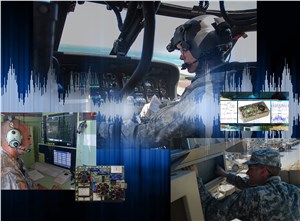 Radar detectors signaling speeding motorists of police presence are about to get a run for their money as the Army is developing innovative radar technology that could someday be common practice for users wanting to mask their radar emissions.

Over the past several years, the threat of being compromised has become an increasing issue for Soldiers in theater. The need to preserve radar system performance while operating in both a contested (adversarial attack) and congested (high traffic) radio frequency environment has presented a significant challenge to radar system designers.

"The battlespace is continually evolving, and with that, comes the need to change the way we think about radar design. Techniques such as real-time re-programmable waveform synthesis and low probability of intercept/low probability of detection (LPI/LPD) provide added capability that will address the emerging electromagnetic spectrum challenges our Soldiers are likely to face in the future," said Dr. Paul Zablocky, director of CERDEC's Intelligence and Information Warfare Directorate.

The APCN waveform embodies select aspects from both traditional and non-traditional radar waveforms, and can be programmed in real-time to allow the system user (the Soldier) to optimize radar performance based on the particular scenario.

"Encrypting our radar waveforms limits the likelihood for adversaries to intercept and exploit our emissions. Programming the waveform in real-time takes this capability even further, and ensures operational effectiveness," said Dr. Mark Govoni, a research scientist in CERDEC I2WD's Radar Division who established the theory and patented the design for the APCN waveform.

This secure waveform could be used not just by Soldiers but civilian law enforcement agencies as well.

"Having the ability to transmit a radar waveform that's continually changing, one that never repeats itself, and looks like noise, is extremely difficult to intercept and becomes advantageous for police because they can now remain anonymous to radar detectors," Govoni said.

"Given the prevalence of software-defined capabilities, it's totally conceivable to consider this type of technology as an alternative to what's currently used with some of the more critical communication networks like GPS and emergency broadcasting," he said.

Another benefit of the APCN waveform is its inherent robustness to frequency congestion. CERDEC researchers have investigated this aspect, and theorize that a follow-on approach called "cognitive radar waveform diversity" could further minimize challenges with interference.

For example, Soldiers using a programmable waveform like APCN, could someday rely on the system's ability to dynamically adapt and diversify its radar emissions while operating in heavy congestion.

Currently, this process is done manually, but researchers are looking for it to one day be done autonomously, Govoni said.

"Autonomy can relieve the Soldier of unnecessary burden, which then affords more attention for his or her primary tasks," Govoni said. "Technologies like waveform diversity and cognition provide exactly that, and are where we're headed with future radar capability."

CERDEC worked with the Army Research Laboratory to build an experimental demonstrator that served as the radar system for the APCN waveform. Researchers modified the existing waveform and interfaced with the system using custom-designed control software. The experimental system was successfully demonstrated at APG in 2012.

"There's a growing desire to consolidate systems operating in the electromagnetic spectrum. As a (large) tenant of this spectrum, radar is an attractive candidate. The kind of technology we're researching here at CERDEC gets us one step closer to real-time coordinated and cooperative operation with other systems," Govoni said. "It's a great example of where Army technologists are pushing the state-of-the-art."