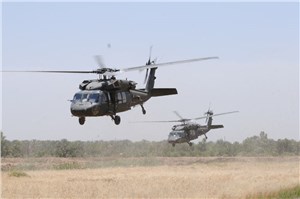 Honeywell (NYSE: HON) has been awarded a contract from the Defense Advanced Research Projects Agency to continue improving three-dimensional visibility and safety for U.S. military helicopter pilots experiencing inclement weather and harsh environments. Among the visual challenges faced by pilots are issues with rain, snow, dust, fog and other elements that reduce the ability to fly and land.

As part of the Defense Advanced Research Projects Agency's (DARPA) Multifunction Radio Frequency effort, Honeywell will program, update and integrate the company's Synthetic Vision Avionics Backbone (SVAB) solution on U.S. military test helicopters such as the UH-60 Black Hawk. Honeywell's technology provides pilots with the most accurate "out-the-window," 3-D view on their primary flight displays, which is critical in low-visibility environments that mask hidden dangers such as treacherous terrain, other aircraft or utility wires.

"Our service men and women are called upon to serve wherever the need arises, and our goal is to provide them with the best technology to ensure their missions are as safe as possible in any environment," said Bob Witwer, vice president of Advanced Technology at Honeywell Aerospace. "Degraded visual environments have cost the U.S. military hundreds of millions of dollars and countless lives over the past decade, and Honeywell's system has the potential to eliminate these costs and save lives."

Honeywell's avionics solution couples the company's Federal Aviation Administration-certified synthetic vision products for business and general aviation with a software backbone developed for DARPA. By providing software and hardware, Honeywell's solution has the flexibility to adapt to different sensors and platforms available to the U.S. armed services.

Honeywell will update the synthetic vision system to support the next phase of the Multifunction Radio Frequency program to fuse information from DARPA's Advanced Rotary Multifunction Sensor radar along with terrain and obstacle databases and satellite imagery. The wider breadth of information will better inform helicopter pilots faced with low-visibility challenges.

Honeywell's synthetic vision technology has been in development and testing with DARPA since 2007. Honeywell's technology helps solve the challenge of degraded visual environments for current and future military helicopters.