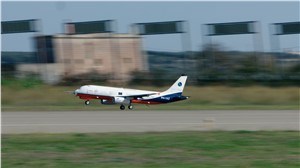 Between 17 October and 31 October 2022, the Scaled Flight Demonstrator (SFD) developed in the frame of Clean Aviation made 19 flights for a total of 8 flight hours, taking off from and landing at Aeroporto di Taranto-Grottaglie in Italy. During the missions, about 70 automated manoeuvers have been executed in order to carry out parameter identification. This experimental campaign is key for the validation of the Scaled Flight Testing approach as a means to mature future disruptive technologies that will significantly reduce aircraft energy consumption.

In order to achieve a climate-neutral air transport system by 2050 disruptive technologies will need to be developed and tested. To progress through the various development and manufacturing maturity gates before integration on an aircraft, industry relies on analyses and assessments based on numerical simulations, wind tunnel testing and many other ground test facilities. To complete the available capabilities for the acceleration of technology maturation, the Large Passenger Aircraft (LPA) Innovative Aircraft Demonstration Platform (IADP) of the European Clean Aviation programme included a validation of Scaled Flight Testing as a viable and competitive test mean to investigate aircraft dynamic behaviour.

For the demonstration purpose, a partnership of Airbus, CIRA, Royal NLR and ONERA as coordinator developed the Scaled Flight Demonstrator (SFD), a dynamically scaled version of a full scale aircraft that features a wingspan of 4 metres, a take-off mass of 140 kg, and a cruise speed of 85 kts. After completion of the Qualification Flights in Deelen (NL) in April 2022, the complete system has been transferred at Aeroporto di Taranto-Grottaglie (IT) to accomplish the Mission Flight Tests dedicated to data acquisition.

The operational team composed of CIRA and Royal NLR personnel has successfully carried out this experimental campaign: on one hand, Royal NLR who designed, manufactured, integrated and tested the complete SFD system as well as the Flight Test Instrumentation was identified as the SFD operator with its pilots having the final say on the system flight readiness. On the other hand, CIRA was in charge of the Ground Remote Pilot Station (GRPS) and of the Guidance Navigation and Control (GNC) systems design, manufacturing and integration into the SFD. Specifically, the GNC has been designed in order to easy flight experiment execution through a software which performs automated manoeuvres to obtain accurate and repeatable flight test conditions. The GRPS allows an efficient interaction between the Remote Pilot and functionalities of the aircraft on-board systems. CIRA, as leader of the mission flight test campaign, interfaced NLR with Italian Airworthiness Authorities (ENAC) for the Operational Authorization to fly in Italy, organized the logistics aspects and operations before and during the flights, liaising with the airport control tower and airport personnel.

The 19 flights allowed a verification of system functions, the tuning of the GNC, the calibration of the air data system and more important, the recording of the aircraft dynamic responses to many different inputs on the control surfaces to achieve a thorough parameter identification process. The subsequent analysis of the flight data to be carried out by ONERA with the support of Airbus assesses the dynamic behaviour of the SFD in comparison to a full scale aircraft taking into account the scaling effects and transposition laws. This final evaluation taking place in Q1 2023 will conclude the validation process of the Scaled Flight Testing approach.

Within the Large Passenger Aircraft Innovative Aircraft Demonstration Platform, partners are actively working on a new version of the SFD that will be used to mature distributed electric propulsion, a potential technology for improving the efficiency of the aircraft of tomorrow with flights scheduled in 2023.