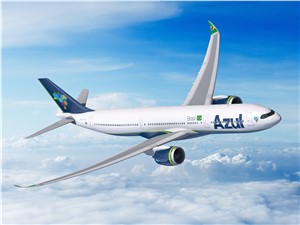 Azul has signed a firm order for three A330-900 which will allow it to further expand its international network and complement its existing A330 operations, bringing the airline’s total fleet of A330neo aircraft to eight.

“We are delighted to have secured three more next-gen Airbus widebody aircraft for the upcoming years. This reaffirms our position as the airline with the most modern fleet in the region, with 70 percent of our capacity coming from fuel-efficient and environmentally friendly aircraft,” said John Rodgerson, Chief Executive Officer of Azul.

“We applaud Azul’s decision that shows their forward looking strategy and proves the economics and performance of the A330neo are most compelling. The A330neo is the perfect tool to support Azul in expanding its fleet with the right-sized, modern widebody, leveraging the latest technology and efficiency and contributing to reducing CO2,” said Christian Scherer, Chief Commercial Officer and Head of Airbus International.

The A330neo is a member of Airbus’ leading Widebody Family that provides lower operating costs and reduced environmental footprint by combining enhanced technologies from the A350 with highly efficient Rolls-Royce Trent 7000 engines. Featured with the Airspace cabin, the A330neo offers an unmatched passenger experience and operational efficiency thanks to a redesigned welcome area, enhanced mood lighting, larger and modern overhead compartments and new window and lavatory designs.

Azul Linhas Aereas launched operations in 2008 and has since grown to service more than 150 destinations within Brazil, and flies non-stop to the United States, Europe and South America. Azul received the Americas’ first A330neo in 2019 and operates 12 A330 Family aircraft. In the coming weeks, Azul will start operating four A350-900 to further expand its route offering and benefit from the Airbus commonality concept.

In Latin America and the Caribbean, Airbus has sold over 1,150 aircraft and has a backlog of over 500, with more than 700 in operation throughout the region, representing almost 60 percent market share of the in-service fleet. Since 1994, Airbus has secured approximately 70 percent of net orders in the region.