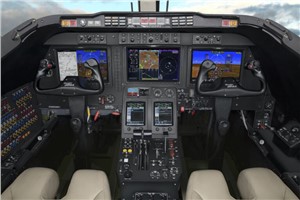 The G5000 flight deck upgrade features three high-resolution 12-inch flight displays situated alongside dual touchscreen display controllers that serve as the primary crew interface to the system, simplifying operation and ease of control of the flight deck. For added flexibility and redundancy, the wide landscape-format flight displays can all function in multi-pane mode, allowing multiple pages to be viewed side-by-side on the same screen. With this capability, pilots can simultaneously view maps, charts, checklist, TAWS, TCAS, flight plans, weather and more – without cluttering or compromising the clean visual layout.

FAA Data Comm Integration
Pilots can streamline their ATC communications via FAA Data Comm messages displayed on the GTC devices. The GDR 66, with an active FAA Data Comm subscription from FltPlan, sends and receives ATC routing updates and frequency changes via text-based messages. In the cockpit, Garmin’s “Push to load” functionality seamlessly upgrades the flight plan and frequency in just a couple taps – no need to re-enter the flight plan or frequencies.

Cockpit connectivity
With Flight Stream 5101, pilots can be more productive than ever in the cockpit with two-way flight plan transfers between compatible apps and the G5000, and wireless avionics database updates via their mobile device and Database Concierge. For added convenience, pilots can now initiate calls and send and receive text messages from the cockpit with the GSR 56 (subscription required). Additionally, the Garmin Pilot™ app streamlines pre-flight planning, in-flight two-way flight plan transfers, wireless database updates and text messages in-flight – all from one convenient, easy-to-use mobile app.

ADS-B In features
The Garmin GTX 345R can now be used as an ADS-B In traffic receiver for the G5000 flight deck, allowing for a clearer picture of the traffic around the aircraft in the national airspace system. The  GTX 345R also brings ADS-B In weather for the continental United States, which allows for additional situational awareness and weather planning capabilities in the Beechjet G5000 cockpit.

Garmin digital radar altimeter now available
With its all-digital design, the GRA 5500 represents the latest and most accurate technology available in radar altimeters and it’s now available for the Beechjet glass flight deck. The GRA 5500 interfaces with the flight displays to conveniently put the AGL readout right in front of the pilot to serve as an integral part of a Class A TAWS or TCAS II solution.

Tell a friend:
Garmin Adds New Features and Updates to its G5000 Flight Deck for the Beechjet 400A/Hawker 400XP