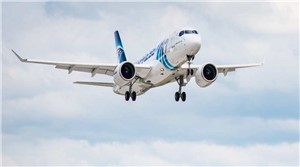 The first Airbus A220-300 wearing the livery of EgyptAir has performed its maiden test flight from the Mirabel assembly line. It means that the first A220, out of 12 on order, is about to be handed to the airline in the upcoming weeks.

Currently, the brand new plane with cabin layout of 134 seats is under the final preparations before delivery. The aircraft will be powered by Pratt & Whitney’s latest-generation PW1500G geared turbofan engines.

The order for this type was placed back in 2017, before Airbus acquired the program from Bombardier. Meanwhile, with 12 new planes, the Cairo-based airline will significantly grow the part of its Airbus fleet.