Another Boeing 787 Dreamliner to Fly for Vietnam Airlines 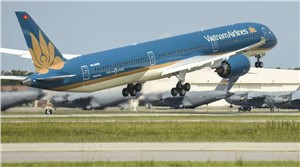 Vietnam Airlines has welcomed another Boeing 787 aircraft to its fleet, although the first one of the 787-10 variant. The first 787-10 out of eight on order was delivered via Air Lease Corporation (ALC).

The aircraft powered by General Electric GExn engines will be used on the busiest airline’s routes, Hanoi to Ho Chi Minh route is among these. The new Dreamliner features two-class configuration with a total capacity of 367 seats.

The flag carrier of Vietnam already operates Boeing 787 planes, although the smaller variant, Boeing 787-9. With the addition of 787-10, the airline will be able to offer 40 more seats for passengers and be able to carry more cargo.

Tell a friend:
Another Boeing 787 Dreamliner to Fly for Vietnam Airlines