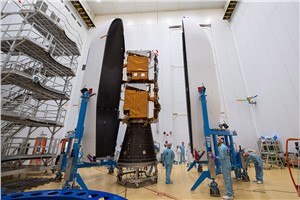 After liftoff from Europe’s Spaceport, the Vega C launcher will fly powered by the first three stages for a little over seven minutes. The third stage ZEFIRO 9 will then separate from the upper composite, which comprises the AVUM+ upper stage and the two Pléiades Neo satellites. The AVUM+ stage will ignite its engine for the first time about nine and an half minutes, followed by a ballistic phase lasting approximately 35 minutes, in order to reach the injection altitude of the first satellite. The AVUM+ stage will then restart its engine for a second burn lasting 2 minutes and 30 seconds to circularize the orbit at an altitude of 629 km before releasing the first satellite. The next step, 6 minutes and 39 seconds later, will be a 15 seconds RACS boost leading to a new ballistic phase lasting about 36 minutes. It will be interrupted by a third AVUM+ ignition phase lasting exactly 5 seconds, and will be followed by the release of the second satellite at an altitude of 614 km. Around nine minutes later will occur the fourth and last AVUM+ ignition for a period of 61 seconds, which will deorbit the launcher. That will mark the end of mission VV22, one hour, 53 minutes and 55 seconds after liftoff.

Pléiades Neo 5 and 6 fully funded and manufactured by its operator Airbus, are the two final satellites of the Pléiades Neo constellation. The first one, Pléiades Neo 3, has been successfully orbited by Vega Flight 18 on April 28, 2021, and the second one, Pléiades Neo 4, by Vega Flight 19 on August 16, 2021. Built using the latest Airbus’ innovations and technological developments, the constellation allows to image any point of the globe, several times per day, at 30cm resolution. Highly agile and reactive, they can be tasked up to 15 minutes before acquisition, and send the images back to Earth within the following hour. Smaller, lighter, more agile, accurate and reactive than the competition, they are the first of their class whose capacity will be fully commercially available. Thanks to these state-of-the-art satellites, each step of the acquisition and delivery cycle offers top-level Earth observation services now and going forward for the next ten years.

Vega C, which stands for Consolidation, has been developed to better respond to customers’ needs based on the lessons learned from the first decade (2012-2022) of Vega operations.

The launcher has been upgraded with more powerful first and second stage Solid Rocket Motors, bigger AVUM tanks and with a larger fairing that significantly increase payload mass (up to 2,350t in SSO – Sun-Synchronous Orbit) and double allowable volume. The launcher also better meets the specific needs of small spacecraft, thanks to its improved SSMS (Small Spacecraft Mission Service) dispenser and to its AVUM+ that will allow seven re-ignitions. Vega C can thus achieve three different orbits for its multiple payloads on the same mission, instead of the two previously possible with Vega.

Vega C development program has been managed by ESA. It associates 12 of Member States of the Agency. Avio Spa (Colleferro, Italy) is the industrial prime contractor for both launch vehicle and interfacing ground infrastructure. Avio is also responsible for campaign operations and preparation of the launch vehicle up to lift-off. Avio hands over a “ready to fly” rocket to Arianespace, which sells the Vega C, defines the missions’ requirements, validates its flight worthiness, and operates it from Europe’s Spaceport in French Guiana. During launch campaigns, Arianespace works closely with CNES, the French space agency and the launch range authority at the European Spaceport in Kourou, who is notably looking after the satellite preparation facilities besides being responsible for the protection of populations.

The launch at a glance: