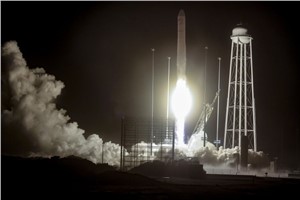 Northrop Grumman worked with NASA to ensure the Cygnus spacecraft completed its primary mission of delivering cargo, even though one of the two solar arrays did not deploy as planned. Cygnus, which launched aboard the company’s Antares rocket, carried approximately 8,265 pounds of supplies, equipment and experiments for the astronauts aboard the station.

“During a rocket stage separation event, debris from an Antares acoustic blanket became lodged in one of the Cygnus solar array mechanisms, preventing it from opening,” said Cyrus Dhalla, vice president and general manager, Tactical Space Systems, Northrop Grumman. “Successful berthing was achieved thanks to Cygnus’s robust design and the resilience and ingenuity of the NASA and Northrop Grumman teams.”

If requested by NASA, NG-18 may perform one or more reboosts to the ISS.

Each Cygnus spacecraft is named in honor of an individual who made significant contributions to the U.S. space program and human spaceflight. For the NG-18 mission, Cygnus commemorates former astronaut Dr. Sally Ride – the first American woman in space. She traveled aboard the second flight of the Space Shuttle Challenger in 1983. She also served as a Mission Specialist on STS-41G and was considered a leader in the NASA community after retiring. A posthumous recipient of the Presidential Medal of Freedom, Ride was dedicated to inspiring girls and young women to pursue careers in science, math and technology.

The “S.S. Sally Ride” will remain attached to the space station for approximately three months before departing with roughly 8,200 pounds of disposal cargo.